The dream goes on... 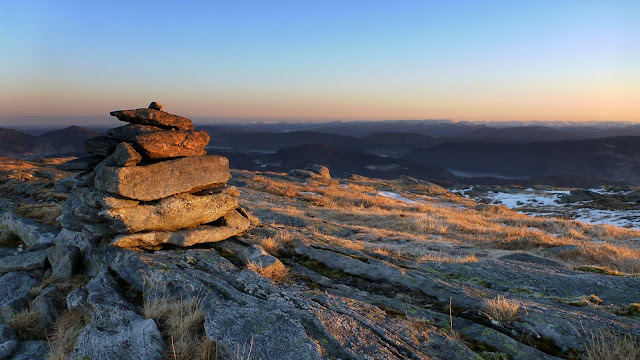 Down below the feet were marching on
There was glory calling, flowers were thrown
Although the sun was shining
The cold blue light of morning
Can't melt the layers of dreams
Left from the night before
The dream goes on...

Snuff - Vikings on the Tundra 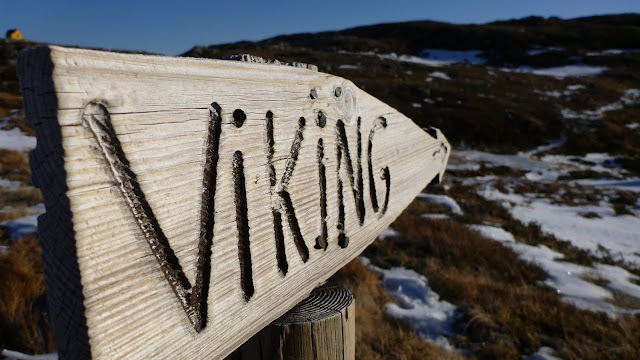 So things have been quiet here. The usual suspects. Apathy, time, real life, illness. But the dream goes on. Restructured, new priorities, fresh inspiration. Sometimes there just doesn't seem to be enough time, especially for me as I pack up my worldly possessions and prepare to move house. Hence this wee jaunt, tagged under Alastair Humphrys' 'micro adventure' initiative.

Two hours. That's all it took me to leave the packing cases, bin bags, stress and reality behind and be somewhere timeless and pure. I left home in the middle of the afternoon with a hurriedly packed bag and headed up with only the vaguest of ideas of where I was going to spend the night.

The trails away from the city were clear but as I fell into the shadow of Våkendalen and climbed into the cool air, the patches of ice slowly joined together to form a solid sheet clear across the path. Tarlebøvatnet was the limit of my grip and I donned mini-crampons to ease the perilousness. Across valleys and ridges I climbed higher, and breathed deeper. 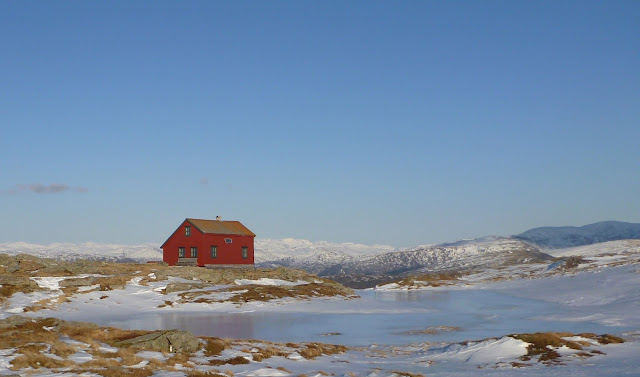 The Viking hut is one of several dotting the Byfjellet hills above Bergen, sitting at about 590m. It is wired by thick cables to the ground, a testament to the winds that can run up here and it has a wooden bench running the length of the building, facing the afternoon sun. I didn't stop this time, preferring instead to continue along the ridge towards Grønetua, in search of a spot that would give me views of both the evening and morning skies. 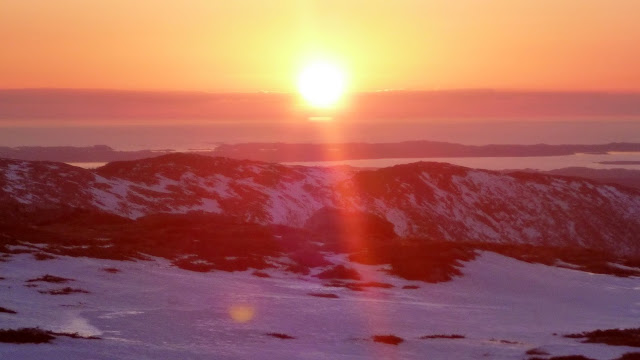 A suitable site picked I gathered snow to melt for water and sat down to a tasty feast of pasta bolognese, solbærtoddy and chocolate. The evening sun, bloated and fiery, dipped behind a distant band of cloud before it's light, and any associated heat, was extinguished in a matter of minutes. It seems you only truly know the fleetingness of days when you watch a sun set or rise in real time.

The night passed peacefully, the stationary high pressure weather system appearing to suck every sound into the heavens. Just the usual it's-cold-outside-so-I'm-gonna-make-you-wanna-pee trick from my bladder. I thought there might be an inversion or aurora so I skipped the pee-bottle routine for a dalliance under the stars. No romantic meteorological events though, save a big, fat, full moon so bright it hurt to look at it. 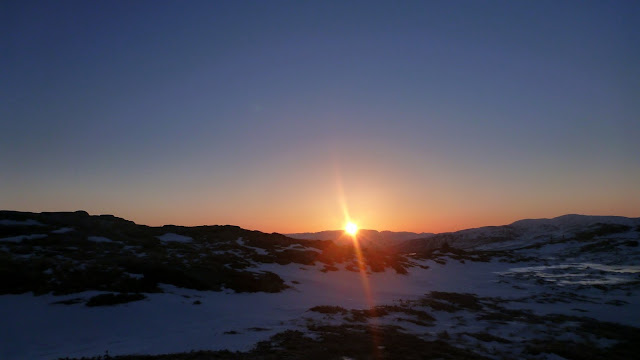 My alarm reverberated in a chest pocket and required enough fumbling to fully wake me despite sleep clinging to my eyelids. Still no inversion but a purple sky welcomed the day with a blushed horizon in the pre-dawn. I melted some more snow for breakfast and sat on a rock with a coffee, watching the sequel to last night's solar performance. A pin-prick of yolky yellow lasered across the mountains from the East. Within minutes light flooded the plateau and it was time to pack up. 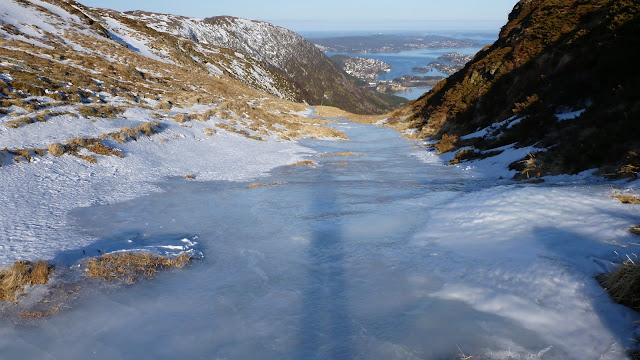 Still wearing a layer of fleece under my windshell I soon warmed up as I first climbed then descended the ridge. I stopped at the Viking hut this time, to shed some layers and pull on my sunglasses. My tracks from yesterday glinted across the valleys in the morning light and shards of ice from my crampon points, like discard diamonds, shimmered and swayed across icy traverses. After an hour and a half the day was really warming up. De-robing as I walked I then had to pull it all back on again as I descended into the still-shadowed valley to the reservoirs. I saw only one person on that walk home.

The winter hasn't gone according to plan. Real life takes over sometimes. But the dream goes on... 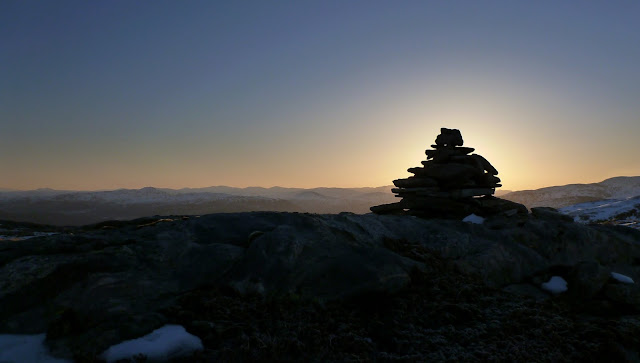 I don't do gear reviews anymore but I still spend an unhealthy amount of time musing about the kit I use so in future I'll blab about it in shorthand after any trip reports (idea totally ripped off from Roger Brown...) 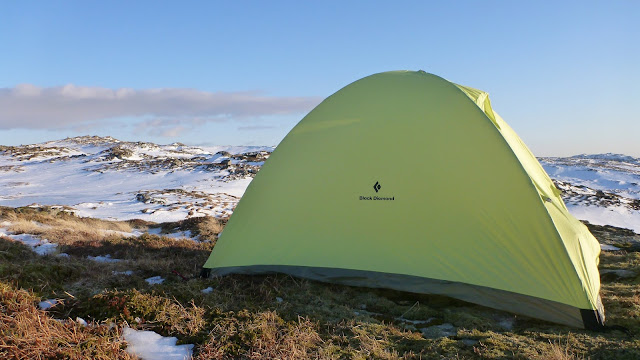 My poor Firstlight has not had much love recently so I gave her a run-out with the cold and dry forecast. Still a cinch to put up and comfortable to live in. Still don't like that door. 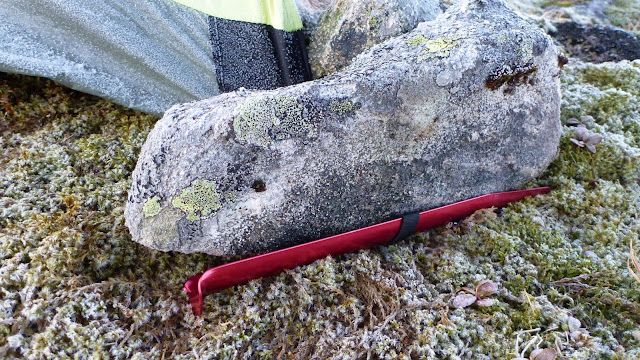 Normally I anchor the Firstlight on snow with skis and poles but I managed to find a pitch on bare tundra. Unfortunately the ground just below the surface was either rock or frozen solid. With only a gentle breeze to contend with she stayed put with the MSR Blizzard pegs dead-manned under some rocks. 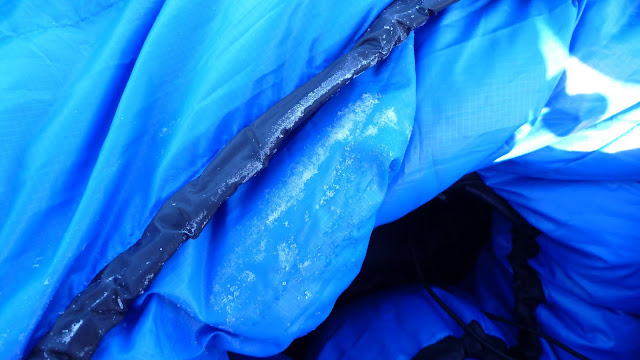 There was no need to lug this -15C rated beast up there in only -10C weather but I wanted to. I haven't had a chance to use my Western Mountaineering Antelope MF yet so I wanted to take my new toy out and play with it. So. Much. Down. Too warm on this trip, which bodes well for trips when I've shivered in my Ultralite. The shell coped with brushing up against the Firstlight's frosty walls but there was some frosting around the mouth area, as there always seems to be in winter. Will someone design a sleeping snorkel for winter camping please?! On longer trips I would still take a synthetic over-quilt. 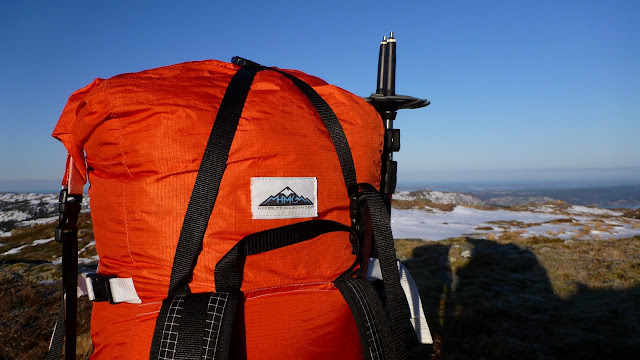 First real outing for the HMG Porter and I'm instantly in love. Very comfortable, it feels like it's been custom made for my torso. I guess it's been a while since something off-the-shelf has fitted me so well. Enough volume for a winter weekender and the outboard daisy-chains made for easy stashing of my Ridgerest, crampon bag, un-used BD poles and Sno-Claw. The colour is adorable, it's just a pity it's on my back so I can't see it more often. It's a good job it's versatile and I like it so much because I've sold every other pack, save an Epic for packrafting/long trips, a Talon 22 for riding/running and a Goruck GR1 for everyday use... Four packs! I'm down to four, that's GOOD! 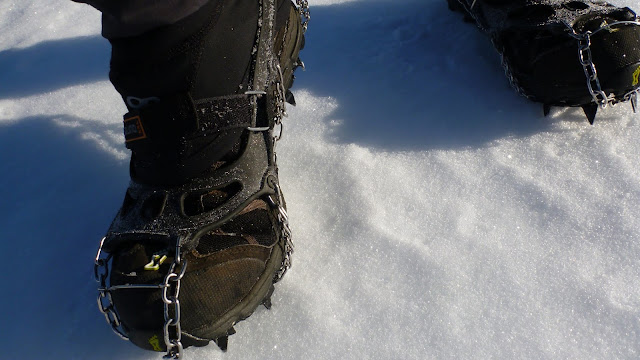 The Hillsound Trail Crampons were stellar. They were crucial on this trip with so much ice and compacted snow. They gripped really well, didn't interfere too much with my gait and fended off mix-trail sections with rock and gravel. I don't think there is much difference between these, the Kahtoola Microspikes and the other generic versions I've seen in the local sport shops, save for the small velcro strap that loops over the forefoot.

Also on my feet were the Inov8 295s, some Bridgedale trekking socks and some OR Ultra Trail gaiters that I've only used a few times but I like the cut of their jib. Still light, stretchy and non-waterproof but infinitely more robust than other 'UL' gaiters I've used in the past.