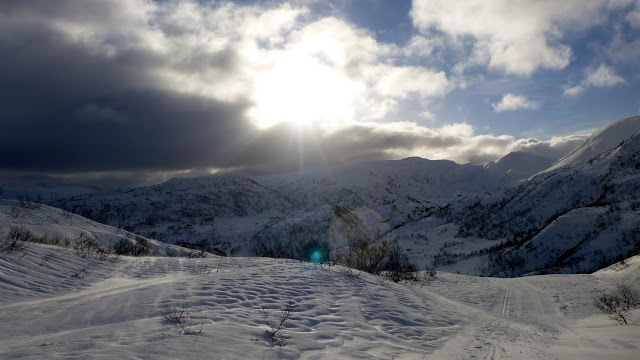 Not sure why I thought Saturday would be quieter on the ski bus. It was heaving. Full capacity. Yes, I was back for more. Repeat customer. Last week's first foray of the season had whetted my appetite. This time, thanks to sunnier weather, the visibility was far better and I decided to head onto the plateau for a full lap.

There was a lot of wind, and had been for some time, looking at the windblown crust. There had been plenty of fresh snow but the trails had been prepped and the surface was fast. Nailing the Corner of Death first try I found myself giggling at my crouched silhouette as I bombed the rollers. The descent off the plateau was fun and I only scared the shit out of myself twice... More miles than last week and far more up and down had my hips cramping by the time I slid into the car park for the ride home. The soporific ski bus with it's heating on too high and metronomic thrum. The pizza and beer at home didn't even touch the sides.

Introducing people to world beyond the city limits is amazing. For both of you. They get to see where you've been 'wasting' your weekends and you get to see your trails with fresh eyes and the innocent glee of your first visit. So on Sunday I took my friend Laura, who has wanted to see what all the fuss was about for some time, on one of my usual jaunts, the straight-up-and-down-the-other-side of Rundemanen.

The weather forecast wasn't too pretty. A fresh breeze, rain mixed with snow and plenty of ice from the cyclic thaws. After a million questions on what to wear Laura showed up at my place and we proceeded around the reservoir and up through the forests.

Above the treeline the wind tried it's best to cut us in two but we were ready for it. The path zigzagged in and out of the wind and the path blipped from ice to snow to gravel and back again. Laura donned her 'grippers' and with only a little help around the steepest switchbacks she made it over the top. Obligatory summit shots, a change of gloves and we gingerly made our way across the small icy valley towards the path home.

Once down into the trees again we were sheltered from the wind and enjoyed the far calmer stroll down towards the city. We passed more people and there was less ice under foot, well, until we got to the path down to the reservoir. Holy shit. The path is asphalt and steep as hell. In the dry it kills your quads at the end of a walk. On damp days it can be pretty slick and slimy. On this day it was treacherous! Apart from a few locals blessed with Legolas-like powers of sure-footedness everyone else was sporting spiky traction apparatus on their shoes and taking it slowly. Laura found it far safer to quadruped her way down Bergen's Cresta Run of a footpath. Shoulda taken the bum sleds.

All smiles at the end of the day. That was the goal and Laura was beaming. Despite the ice, the cold, the wind, the snow and even my jokes. On her way home she text that it was 'soooooo much fun'. Another satisfied customer.