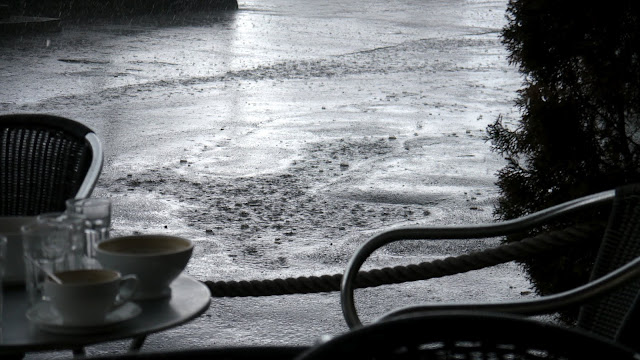 What I desperately needed was a tonic to the crushing disappointment of our trip to Vassfaret and Sveningen. What I needed was sunshine, less bugs and drier trails. Luckily I had a weekend with Thomas already booked into the Moleskine diary. It couldn't be wet, boggy and buggy three trips in a row, right?

The overnight train to Oslo is good on paper. The chance to sleep the seven hour journey away and not waste too many daylight hours travelling. The reality is that unless you want to spend double the price for a sleeper berth then you are going to have to get into the groove of sleeping in an upright seat. Thankfully NSB provide a small token to sleeping comfort by supplying you with a vaccuum packed bag containing a fleece blanket, blow-up pillow, eye mask and ear plugs. As I was travelling on a week night they also provided a relatively quite train and despite the best intentions of the noisy and disrespectful neighbours behind me I managed to curl/stretch out onto the empty adjacent seat and get a few hours quality sleep amongst the limbo of public transport sleep deprivation.

On my arrival I trusted my new found faith in technology to deliver myself to Thomas and Helen's front door via public transport and internet mapping. It worked a charm and I was soon tucking into a fine 'full English' and catching up with my friends.

I was looking forward to taking a backseat on this trip with Thomas taking the lead in orgainising and navigation. It meant I could relax more, enjoy the nature and play with my camera far more than I had in Vassfaret where my duties as host and navigator meant my camera spent far too much time in my pack. Unfortunately Thomas's reliance of technology to deliver us to the correct bus stop on time didn't work out quite as planned and we killed time until the next bus with a look around the local outdoor sport shop (500ml Nalgenes come in such pretty new colours!) and a final real coffee. It was while sitting in the sunshine at the coffee shop that the sky turned jet black to the north as heavy, thundery showers rolled into the city, just as departure time approached...

Thankfully we managed to catch the next bus (after some Olympic standard street crossing) in the middle of the downpour and missed most of the rain as we travelled north west to the trail head. By the time we alighted the sun was already out again and we dried out quickly. The world hummed with insects and flower perfume as Thomas effortlessly lead us through meadows and coppices towards the higher trails. 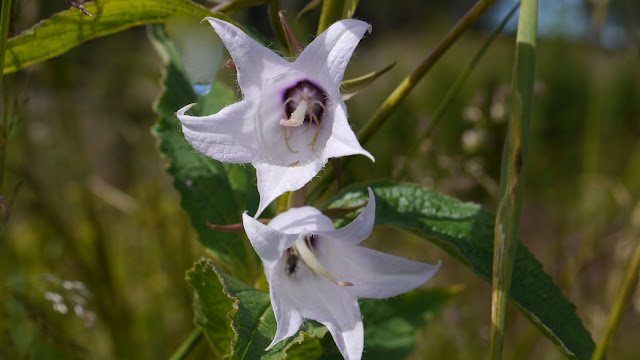 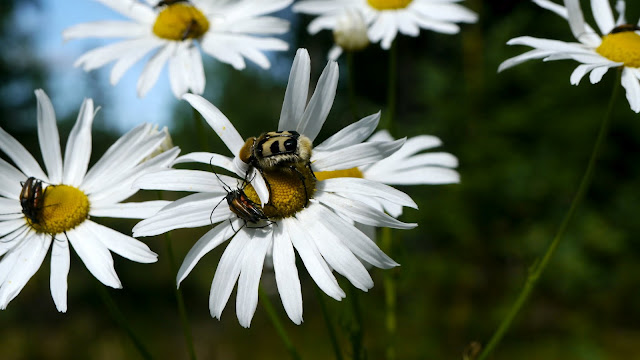 'Super trail' is a description Thomas and I came up with last year on the Jotunheimstien for those sweet lengths of deep forest single track trail that offer easy walking over a firm but forgiving forest floor, the way marked by a distinctive corridor through pine needles and ferns. There are few rocks or roots and no bog or mud. These stretches don't last for miles at a time and are therefore appreciated much more. This trip had them by the bucketload, giving respite from the rough and boggy stretches we encountered. Mmmmm, super trail..... 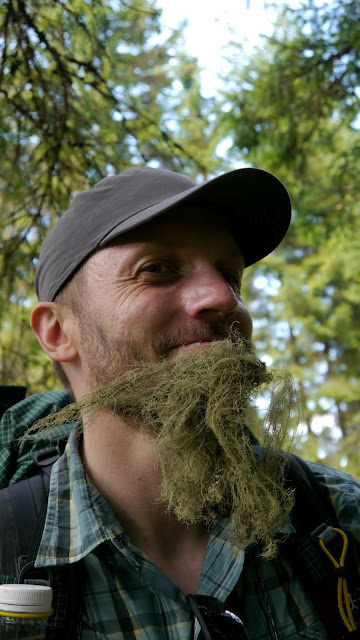 Moods were high. I was relishing the easy conditions and spending time with Thomas who shares my sense of humour, influences and appreciation of the minutiae of the trail. He patiently waited for me to take a dozen shots of the same flower, most of which will never see the light of day. 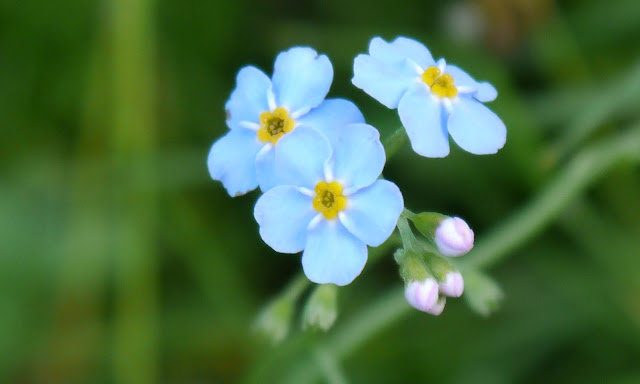 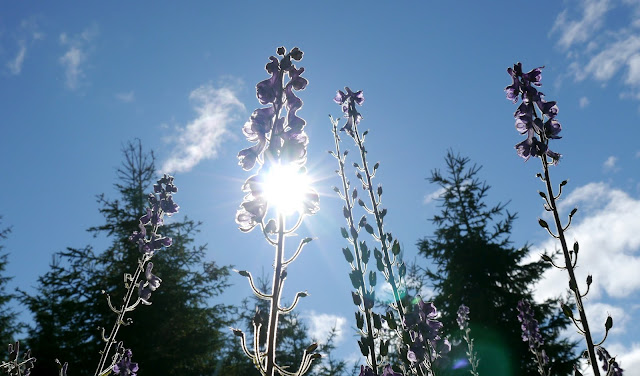 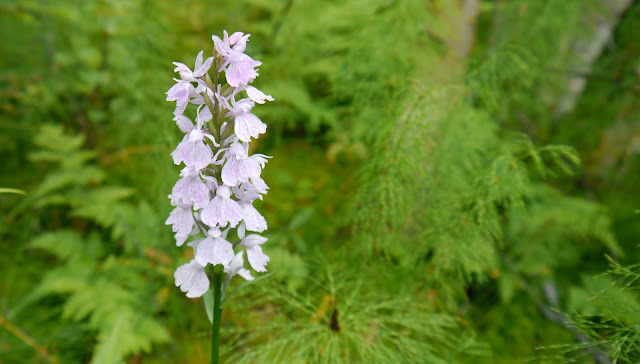 We climbed higher but imperceptibly so. The forest areas around Oslo are simply thought of as flat so imagine my surprise when we got to stand atop some cliffs and gaze in wonder across the fjord and farmland, further west, all the way to the mountains. The trail runs along the cliff top and while the sickening fall is only a few metres away it is thankfully shielded from sight most of the way by the final flowers, trees and bushes that cling to their heavenly perch. 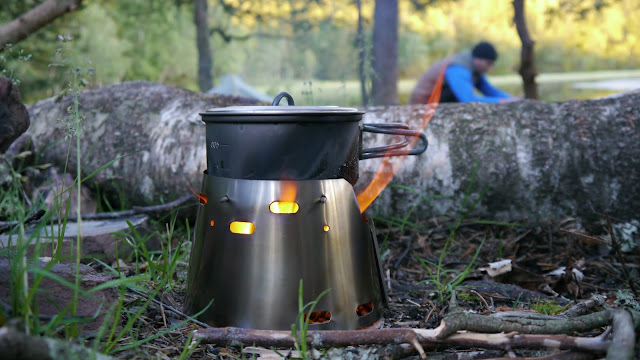 We camped next to an idyllic lake. The sun setting slowly across the water, the rushes, lilies and lastly the encompassing trees. I cooked over wood for once, relishing the smell. No-see-ums were noticeable but mosquitoes were rare. Only when the on-shore breeze subsided late in the evening were we forced to retire to the sanctuary of our bug nests and into the arms of sleep.

My alarm clock was sheep-shaped, walking around the lake towards our camp, slowly getting closer. The bell around her wooly neck made for a gentle alarm call. I unzipped the bug net, climbed out, snapped a picture and watched her gambol away in a slight panic, possibly at the sight of my morning hair, causing her bell to chime wildly for a moment. The cacophony didn't seem to wake Thomas so I snuck off, camera in hand to explore the lake. 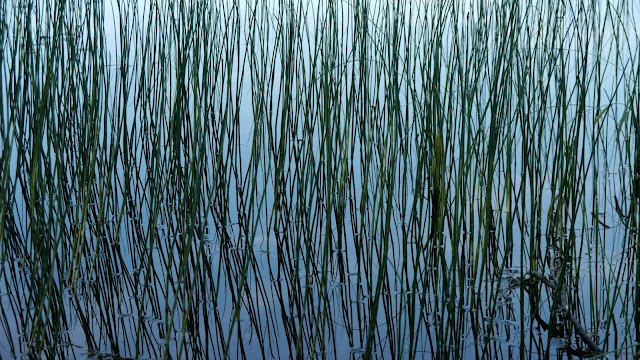 A few fish topped, causing expanding rings of shadow on the water surface but the windless morning was otherwise silent and still. It was too cold for the insects to start their busying. It had dropped to around 3C overnight. 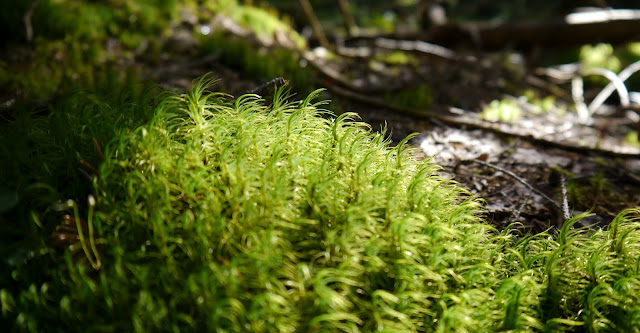 Walking back to camp for coffee and breakfast I detoured through the forest and marveled at the ferns, caught in the glow of the low morning sun they seemed to stretch and yawn like everything else under the green canopy. Slowly the world was waking up. 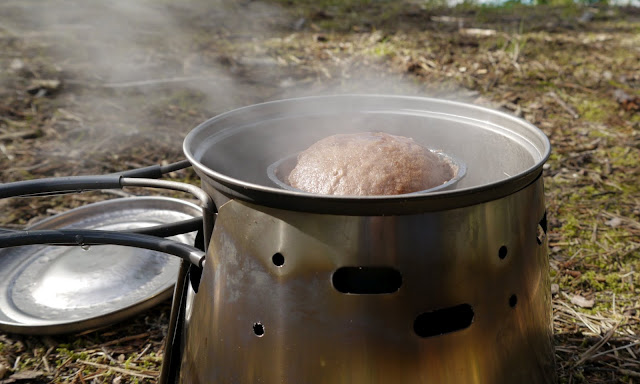 Thomas stirred as I mooched around camp. I decided to steam bake him a chocolate muffin. I toyed with making a how-to video while I baked but decided I would be better off doing this at home with more time and preparation. 1 Esbit tab later and Thomas dug in with a spoon, seeming to enjoy it. 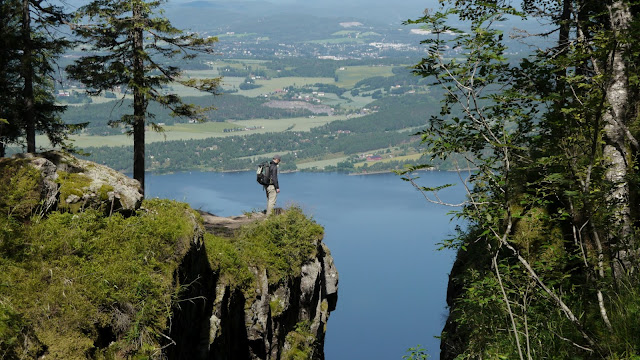 A morning side excursion to Mørkegange, the Dark Way, was in order. We'd passed nearby the previous evening but from conversation with the only people we met on the trail that day it was worth the trip back down the hill. They weren't wrong. An angry slice down through solid rock in the middle of granite cliffs overlooking a fjord made for some spectacular views. I got clammy palms when I got too close to the edge. 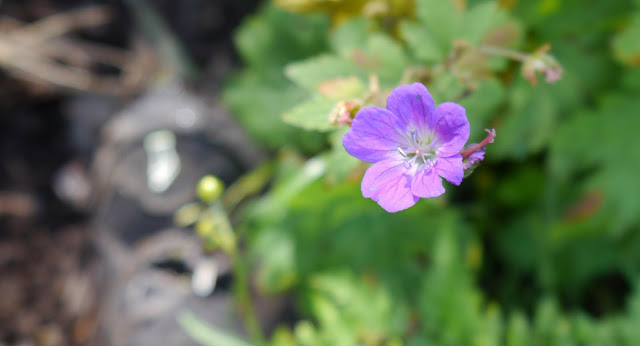 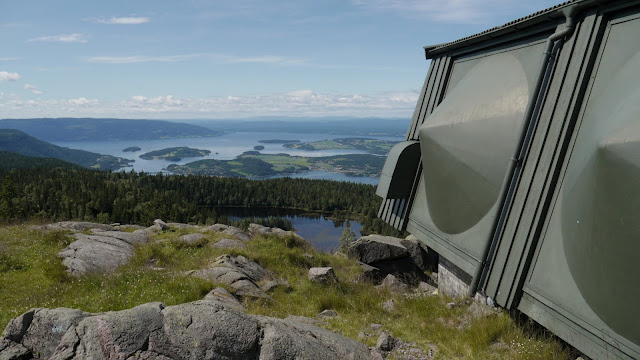 The climb back past our camp and up to Gryihagen warmed the last cold corners of our bodies. We topped out above the trees and were greeted by some crazy radar camouflaged military instillation. We stopped for a quick break, soaking in the 360 degree panorama and allowing our shirts to dry in the breeze. Thomas picked out landmarks for me and we both wondered at the names of the bigger lumps away to the west.

Descending the trail again we were denied access to waffles on two occasions just a couple of hours apart as promised 'weekend opening' cafes, deep in the forest proved to be cruel jokes. We were vafler-blocked. We made do with fat-oozing reindeer sausage instead. 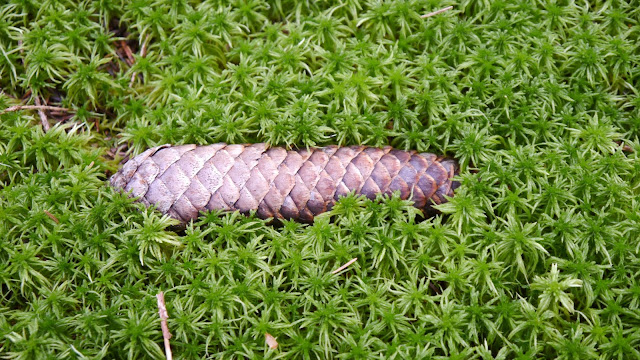 Despite my home's proximity to the mountains it's the textures, as well as the colours, that keep drawing me back to the forests several times a year. The carpets of mosses, lichens and ferns fascinate me, each one a totally separate and miniaturised kingdom. 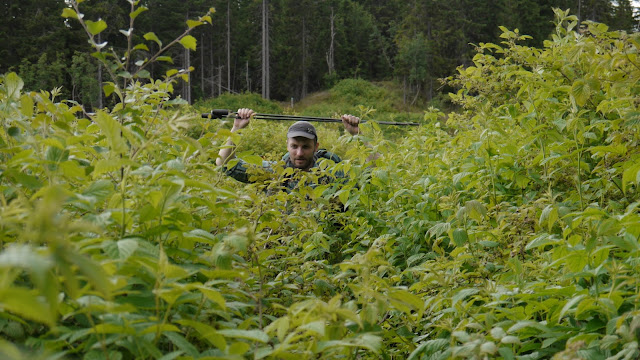 Any bushwhacking on this trip was short but not without it's pitfalls. Somewhere on this stretch Thomas lost his sunglasses to some slightly enthusiastic fronds. Thankfully they were only classy 3-pairs-for-$10 efforts so he'll be ok and some bushes near Oslo are sporting some killer shades. 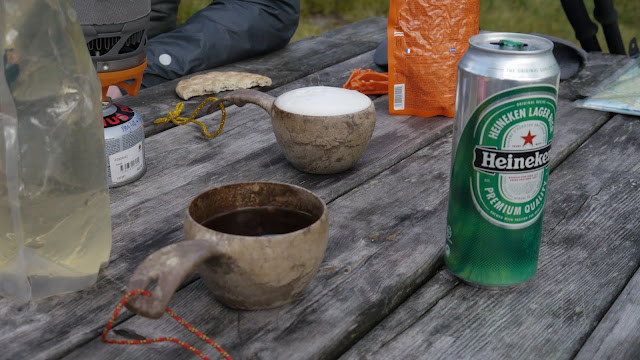 It was time to stop for dinner, find somewhere to pitch the shelters and finally drink that can of beer we'd been carrying. Half a kilo saved there. 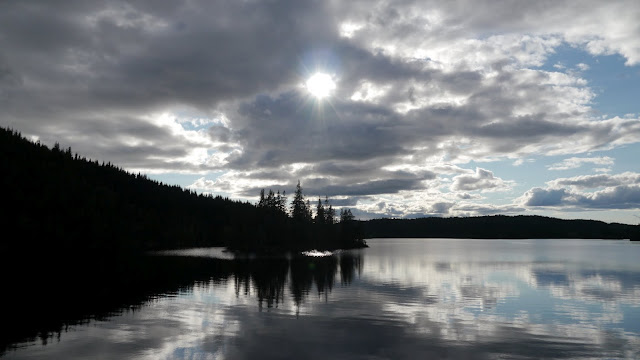 We split that night into two sites. We enjoyed the lakeside setting of someone's empty private hytte, using the convienience of their picnic table to relax and appreciate the display of light and cloud across sky and water. Our shelters were in less salubrious settings, pitched away from the private hyttes in a corridor shared with a power line. As we were only going to sleep there the aesthetics seemed less important than the need to be stealthy. 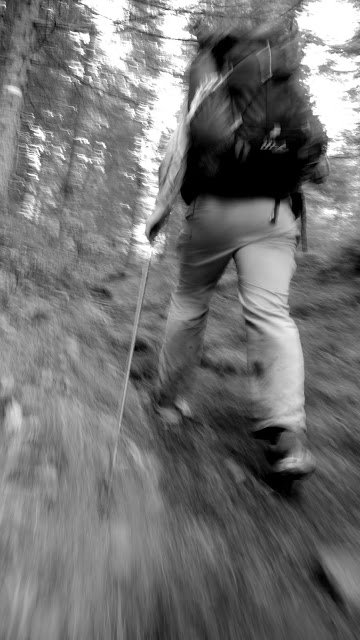 The morning rolled around far too quickly for my liking and we awoke to shelters dripping in condensation. The rain in the previous afternoon, thick vegetation and still, humid conditions meant the moisture had nowhere else to go. We packed up quickly and headed back to our picnic bench dining table for breakfast and coffee.

With just a 8 kilometres to the trail head we could afford to spend plenty of time taking photographs and shooting video while enjoying plenty of super trail interspersed with some jungle and bog. We broke once for a break, polishing off the reindeer sausage and brewing the last hot drinks.

We emerged from the forest periodically into more and more abundant meadows, blinking in the bright yellow and blues after several hours soothed by verdant greens. Butterflies seemed more relaxed here, possibly due to the more frequent foot traffic, and sat patiently for their portraits. 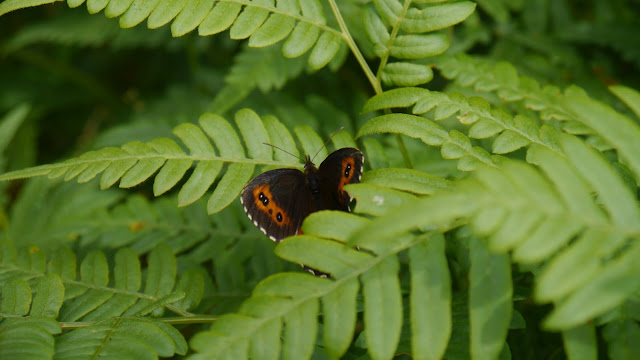 Eventually the trail spilled us out onto a gravel road and almost immediately into lots of people enjoying their Sunday afternoon exercise. Trail decompression was underway. 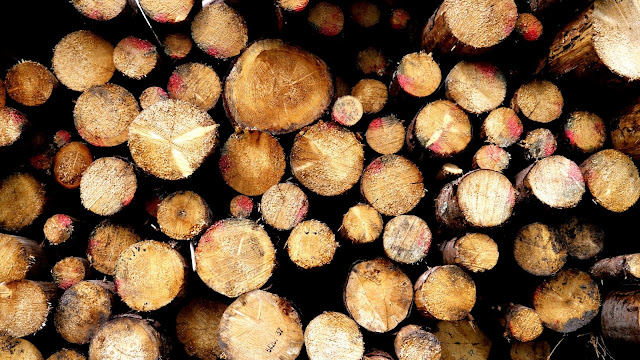 We sat at the bus stop at the trailhead and hoped that the bus driver would let us on, caked as we were in mud, trail patina and smiles. We wend our way via the bus and two T-bane trains back into and across Oslo, stopping for a obligatory hotdog and Solo. Helen met us walking down the road and we walked back to their apartment for home cooked meatballs and potato. I kept myself awake during the evening with coffee but it didn't soothe my scratchy eyes. Bidding Thomas and Helen farewell and thanking them for their company and hospitality I walked through the darkening streets and drizzle to the T-bane and the 25 minute ride to the central train station. Back in the chaos of NSB's summer rail works I queued for a coach that drove us to the outskirts of the city. There in Drammen I boarded a packed overnight train. Space at an absolute premium. Kids and dogs vocally broadcasting their displeasure. Nobody very comfortable sharing their night time routines with all these strangers. Cornered next to a window I nested in the complimentary fleece blanket, coiled into my hoody, tuned out with my headphones and... promptly spent seven hours in a stuffy, sleep-deprived limbo...

This trip was fantastic. Mellow and sometimes spectacular, in good company and weather. It was just the pick-me up I needed and I am grateful to Thomas for taking me. Cheers T!

For Thomas's account of this trip and more detailed information about the area head on over to Thomas's blog by clicking here... 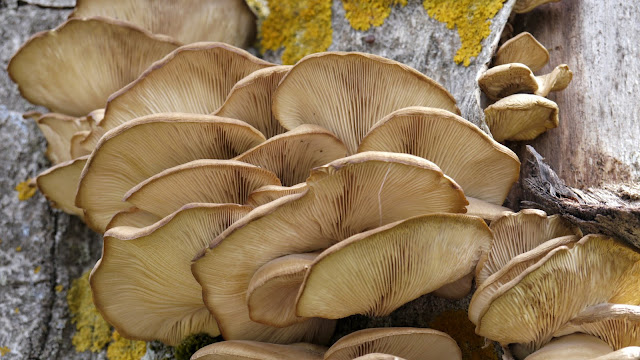