Fly in the Disappointment 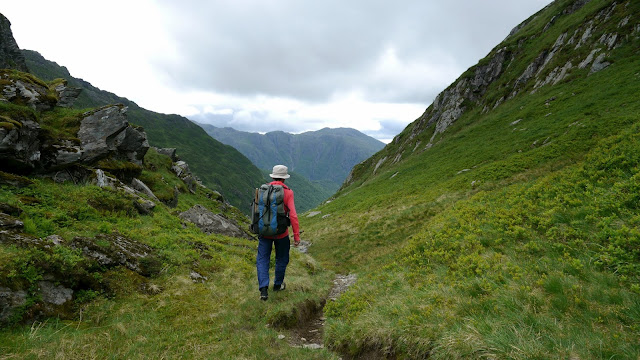 So here we go. Plan C. Back in Bergen after Vassfaret we dried out all the gear, festooning my apartment, balcony and basement in every colour and type of outdoor material you can imagine. The washing machine and tumble drier went into overdrive. I told the guys about the great ridge walk not too far out of the city with fantastic views. We could add a few trails to the walk in and walk out and make a couple of days out of it. It seemed like a go-er. We planned to set off later that day but by the time we came back from shopping for supplies I had come down with some mysterious flu-like illness and was forced to go to bed for the afternoon. Beni too was sick but soldiered into the city with Marco for some sight-seeing and tourist shopping. The next morning everyone was feeling fit and energised again so we packed light and aimed for an overnighter on the  Svenningen ridge. One last roll of the dice for views of glaciers, mountains and fjords.

We took the light railway across the city and then helped our taxi driver navigate her way to a mountain car park. The trail to Redningshytte, in the bosom of Gullfjellet, is a popular weekend family hike but on this weekday morning it was almost deserted. Some work is being done on the dam and reservoir in the area and the trails are being moved. It didn't take long to leave the signage and dumper trucks behind and within the hour we were sat on the stone deck at Redningshytte, unfortunately closed for waffles and coffee. Down the slash of Hausdalen we spied the spine of the Svenningen ridge. It was dry and warm here but over there it looked moodier as a light cloud passed over Sveningen's features. Please, just a small break in the weather... please.

The hike down Hausdalen is always a pleasure. It's steep and rocky at the top but you start walking alongside an infant spring and watch and travel with it as it grows from the merest trickle, gradually fed by other small springs on the way. Before your eyes it grows up into a mountain stream and eventually a small river. The weather became warm and even sunny. We hiked in baselayers and sunglasses. My hopes of saving Beni and Marco's vacation soared. A summit camp maybe?...

As we turned the corner into Brekkedalen, the narrow valley between the walls of Sveningen and the lower ramparts of Gullfjellet, the weather really started to turn again. Clouds roiled and Sveningen's countenance was suddenly shrouded in an impenetrable halo of darker cloud. A summit camp was out of the question. The rocky ascent would be slippery and dangerous. Et tu Plan C? 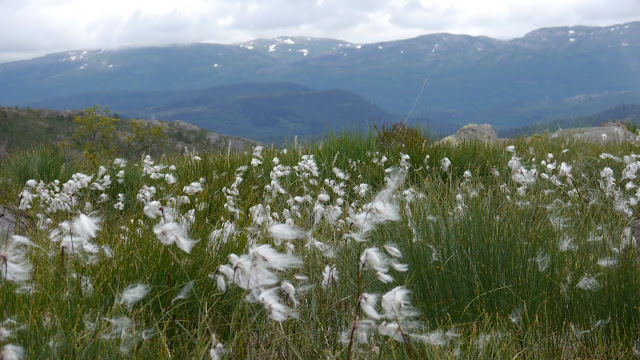 Planning on the fly I led the lads to Brekkevatnet, a lake at the base of Sveningen's most popular path to the summit. We found an area of long grass that would accomodate our shelters, this time Marco brought his MYOG solomid and I, the SpinnTwinn. Standing deadwood was abundant so we set about collecting enough for a fire. 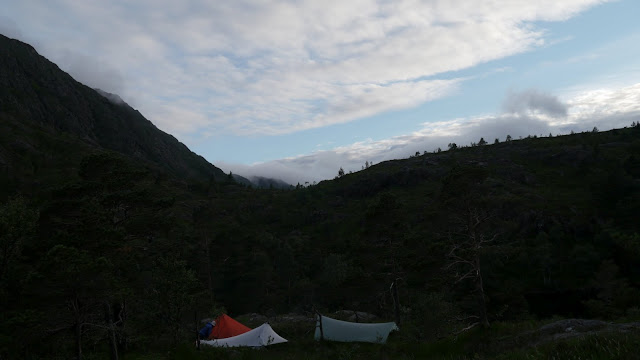 We curled up in the long grass at the base of a protective rock outcrop and had dinner while discussing our hopes for clear weather and a spectacular ridge traverse in the morning. As the evening progressed the sky started to break and moments of sunshine and blue sky pierced the swirling clouds. Hopes refreshed as the fire crackled next to us. 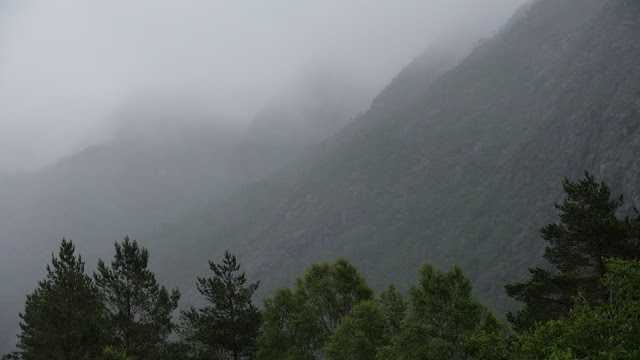 My first thought when I opened my bleary eyes was 'Well, that looks a little brighter' but then as my eyes adjusted and I removed my foam ear plugs I noticed the pitter patter of rain on the spinnaker fabric fly. You bastard. You complete and utter bastard. Rolling over and peering out the bug innernet revealed a Sveningen in a foul mood. Dark and brooding, not in a halo of cloud but in a floor length veil of rain and misery. Beni and Marco were soon awake and could hear the rain. Anyone got a Plan D?! 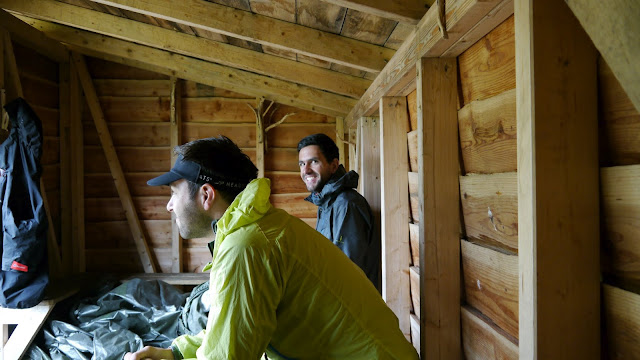 I thought we might console ourselves with some fishing in the lakes that we would pass on the trudge back to the road but the constant rain, gravel road-pounded feet and eerily quite streams and lakes quashed anyone's desire to stop and get their Tenkara rods out. Despite this the boys did a good job of continuing to smile and joke, a heart warming feat as my own mood blackened at the succession of failed plans to show them Norway's glorious nature. 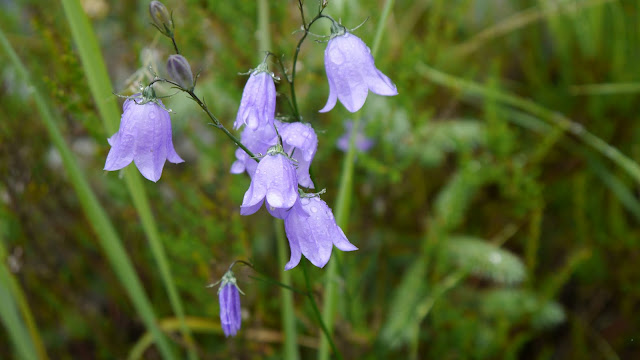 We took the short bus ride back to Bergen, bought food in the supermarket and holed up again in my apartment. Beni whipped up two humungous homemade pizzas that managed to defeat our appetites. Thoughts of heading to the pub for a non-victory pint of Guinness faded under a haze of tiredness and carbohydrates. Tomorrow Beni and Marco would leave for their own corners of Europe, taking with them memories I feared of a wet, cloudy and uninspiring trip, as well as the kilos of chocolate and reindeer sausage they stuffed into their suitcases.

Looking back on Beni and Marco's trip to Norway I still feel a sense of regret that I wasn't able to show them the glitzy glaciers, fjords and mountains they know reside here. The weather could not be helped but I think I learned valuable lessons in contingency planning for the future.  If they got a small taste of the country then I hope they will want to come and try again. I know all the bugs and rain were pretty alien to Marco and he coped with these conditions admirably. He certainly had a wonderfully stoic attitude to it all and was an exemplary tent mate, quiet and organised. Beni I know was excited by all the whitewater we got to see, unfortunately mostly from the train. The scope here for whitewater packrafting is endless and we will get a better taste of it soon Beni, I promise. That they both had smiles on their faces during those last days was testament to their characters. Takk for tur. I hope I will see you guys again soon.