This neat little package from Optimus of Sweden arrived in my post box courtesy of Hendrik and his great idea of having some test equipment on a 'pass around' basis, which will result in a wider range of views, under different circumstances, than a single tester can obtain.

The product specifics are here and whilst there is nothing groundbreaking or revolutionary in the product's design, it is a solidly built, well packaged bundle from a very well respected manufacturer.

First, the stove. I've used Optimus stoves before and currently have the ever-so-slightly heavier, ever-so-slighty-wobblier folding version, the Crux. The flame spread on the Crux Lite is just as good and I've never had a problem with the jets blocking. I'm not one for timing boils, instead enjoying the extra time it takes to boil water in the wilderness compared to the kitchen to soak up the views, but suffice to say it's a damn sight quicker than the Trangia it was working next to!

While not folding up to the magical disappearing dimensions of the Crux, the Crux Lite does have folding pot supports and does easily fit in to the Terra Solo Pot with enough room for a 110 gas cartridge and an Optimus Folding Spork. Neat!

If I was to offer any constructive criticism of the burner it would be that I prefer the stability of four pot supports over the three sported here on the Crux Lite. It was never too much of an issue as I'm always careful when operating backpacking stoves but there was the odd occasion when I'd suddenly feel the need to move the pot around a bit until it felt 'secure'. Obviously adding another pot support would also add a wee bit of weight. The other thing I'd like to see Optimus offer is a nesting windshield for this set, similar to the one produced by Primus.

The Terra Solo Pot was more of a mixed bag. In the past I've often thought they looked like a neat, good value, well appointed pot set but in use a couple of niggles arose. As you can see from the photos the set was well used by the time it arrived here in Norway and the main pot was blackened, possibly by solid fuel or wood burner use but it didn't have any detrimental effect. There are two great features on the Terra Solo Pot that are missing on some manufacturers pots.

Firstly, there are graduated volume markings, stamped into the metal which are crucial in measuring water and preventing freeze dried meals turning into sloppy mush. Secondly, there is the teeny tiny spout that makes the difference between carefully pouring boiling water into freezer bags and having the scalding liquid running down the side of the pot and into your lap. Other manufacturers please take note!

A slight niggle was the design of the wrap-around handles. While nicely insulated, with rubberised tubing they were the wrong shape for me. I prefer proper mug shaped handles that I can get my fingers into, especially if I'm using the pot as my mug as well.

Now the bit I really didn't like. The lid. I can understand and appreciate utilising the lid of larger pots as a frying pan, especially on cooking sets aimed at more recreational camping but I'm not sure I see the point on a 'fast & light' solo cook set. It's so small that you'd be hard pressed to fry anything in it at all and how many ultralighters carry eggs into the backcountry to have a fry-up anyway?! The main pot has a stated 600ml capacity but it's more realistically around 500ml, not a lot of capacity to boil enough water for a freeze dried meal and a hot drink. Ditch the 'frying pan' lid Optimus and just gives us a true 700ml pot and a snug fitting flat lid. With no need for the second handle either, it'll weigh less too! 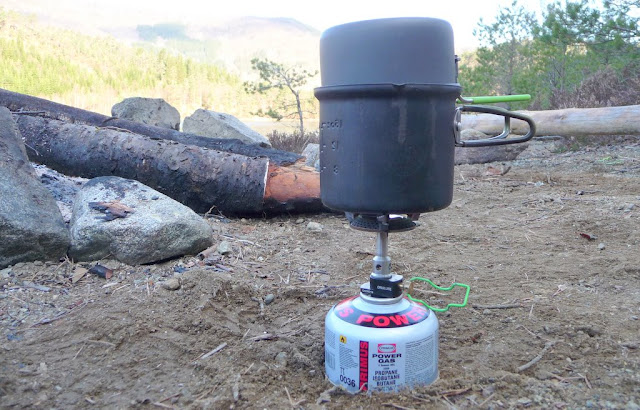 Is this set for me? Probably not. At this time of year I'm using alcohol, and very shortly wood, to boil my water. Both are lighter and more environmentally friendly options. I do however use gas stoves in the winter but I require a much larger pot than the Terra Solo, at least a litre or more, for melting snow. Nevertheless, Optimus have created a very competitively priced, lightweight, neat package in the Crux Lite & Terra Solo Cooking System, with some good features and a very good burner. My main gripe is that 'frying pan' lid, change that and it's a winner for the solo traveller who chooses to cook with gas.

Many thanks to Hendrik and Optimus of Sweden for giving me the opportunity to test this equipment.

Hendrik - thank you. And thanks for passing this test gear around for us all to have a play with.

Thomas - thank you. It was fun getting to try out new gear and look at it objectively without the prejudice of 'I spent my own hard earned cash on this so of course it's bloody brilliant!'.

I own the stove and love it, but have had a bit of trouble with the stove arms becoming difficult to fold out over time. Also, accidentally stored the stove wet and the arms rusted a bit, making them even more difficult to open and close. Besides that, it's light, efficient, and can simmer.

Thanks for your take,

Hamilton - The pot support arms can be loosened up with a tiny squirt of WD-40, GT-85 or similar. I've had similar issues with my own Crux. I guess Optimus design the supports with tight tolerances to prevent the supports just flapping in the wind!

The ability of gas burners to simmer is a major plus if you're inclined to do proper cooking in the outdoors. Me? I like the hassle-free freezer bag cooking method. Boil water, dump in, eat, bin, no washing up.