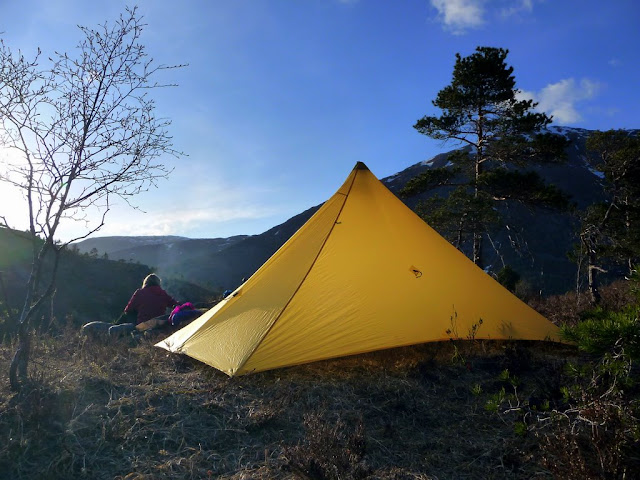 After last weekend's heavyweight glamping and the impending Scandinavian Ultralight Bloggers Meet-Up making me nervous with excitement it was time to pull my ultralight head on and give my 'close to final' kit choices a shakedown. So I poured over a map and decided on a route I had wanted to do for a while, a ridge walk that linked three summits in the Sveningen area, just a short drive from Bergen. To add another dimension to the trip my ex-girlfriend/sometime-hiking-partner Marit wanted to come along and see what all this 'ultralight malarky' was all about. Before we set off I gave her a first lesson in packing and promptly removed one pair of socks, a 'spare' merino top, a big bottle of anti-bac and a whole tube of toothpaste from the pile of gear on her living room floor. She fought hard and well to cling onto her iPod and hairbrush. We arrived at the car park late in the afternoon and forewent the easy option of camping where we'd 'glamped' the previous weekend in favour of a few hours of convoluted, scratchy, steep bushwhacking to perch ourselves 300-odd metres above the valley. We found the only 40 sq. feet of clear space in the Capercaillie and deer shit infested forest and settled down to a carefully guarded fire, roasting wieners on sharpened sticks and admiring the sunset through our birdcage of briars. Wrapped up like burritos in our bivy bags we nodded out under the DuoMid's mellow yellow. 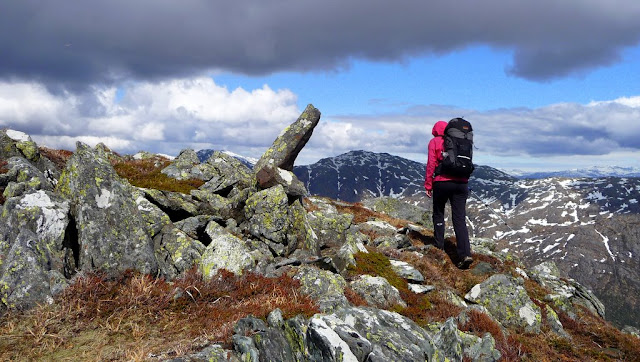 The next morning, short on water, we decided on a quick start and a delayed lazy brunch once we found a suitable spot. After another hour of onerous bushwhacking and artistic route finding we broke out above the tree line and stopped at a lake for some Clelland!-inspired groovy-biotic oatmeal. Thus began six hours of sublime trail that traced the rounded spine of the greater Sveningen massif with the 843m summit of Svinningen itself as the sting in the tail. Clouds whirled and mutated above our heads, sometimes as black as an iron stove, sometimes ethereal white wisps swaying across the sky. Around lunchtime we were joined at the top of the world by two dog fighting gliders, hell bent on out-flying each other in the thermals. 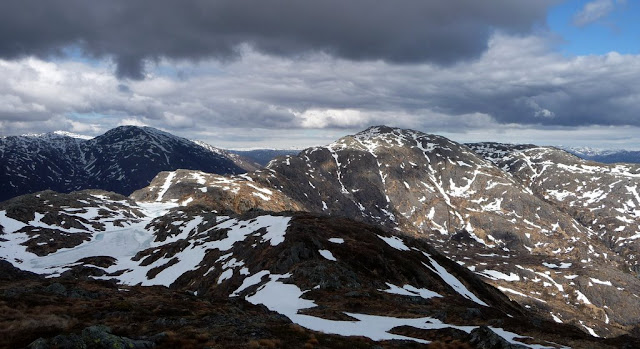 There are some ugly steep lumps lingering in your peripheral vision as the ridge narrows and swings east towards Svinningen. I think we were both secretly a bit nervous. We had a window of cowardice that neither of us wanted to take, an escape route down to the lakes far below. We passed that option and kept going. Lack of daylight is not something we have to worry about here at this time of year and despite the odd black cloud the general weather status looked good. "Let's just push our noses up against the granite, then we'll know how steep it really is. We can always backtrack". Thankfully, as is often the case on routes like this, the reality is that with a bit of scrambling and care each piece of the puzzle fell into place and one by one the granite lock was picked. Over a few false summits and a few airy, snow covered cols and Svinningen was ours again. Any elation we had of getting to the top was soon fizzled out with the reality of getting down the other side. A lot more wet snow, steep in places and then an hour of intricate, jumbled rock to pick our way down. 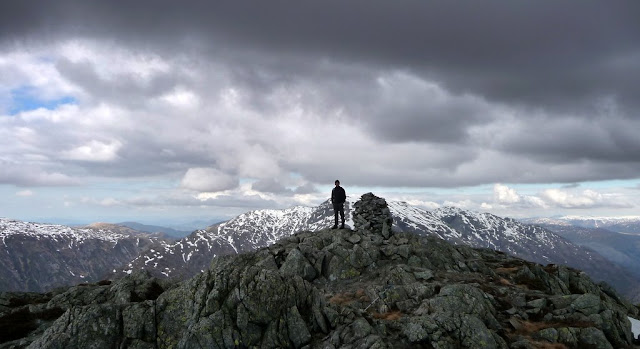 Camp arrived at just the right time, feet and spirits flagging after having our foot on the gas for seven hours. A wonderfully flat sunny pitch, overlooking a mirror-finish lake and more firewood than you could shake a stick-shaped piece of firewood at. We slept long, serenaded by a nearby waterfall. The following morning was slow, drying and packing gear can get like that when your schedule includes no more than walking an hour and forty minutes along forest tracks and tarmac road back to the car. The whole way back Marit was singing the praises of 'going light'. She'd found her own level. She wants a heavier, warmer sleeping bag but only one 'walking stick'. She likes the pretty Granite Gear stuff sacks but not getting her socks covered in twigs and thorns. She wished there was a decent dehydrated red wine but loved the freezer-bag cooking. 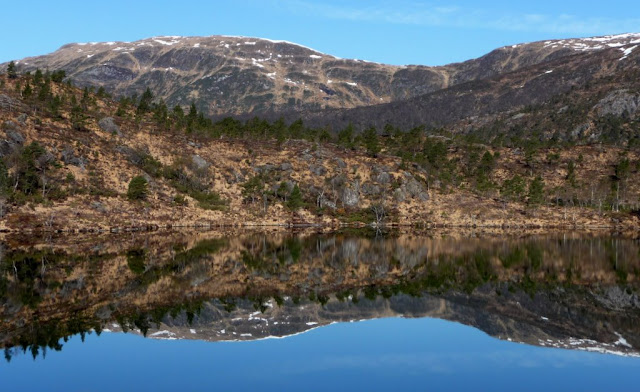 I still have a few kit issues to work over before my trip to Sweden but on the whole this shakedown was excellent preparation. The Mountain Laurel Designs DuoMid worked well, it's yellow simplicity brings a smile to my face whenever I saw it. The GoLite Ultra quilt was a revelation, not sure I could go back to trussing myself myself up in a bag again until the depths of winter. The GoLite Peak was comfortably invisible, stripped down now to a fighting weight of 527g but not without it's shortcomings. I'll post a final gear list for the gear heads in the next week or so. Just waiting on a stove from Bob & Rose.

The stable weather helped with the relative ease of this weekend, something we can't rely on with on a trip with a fixed time schedule but I'm feeling good. Nervous too, but it's a good nervous, you know? 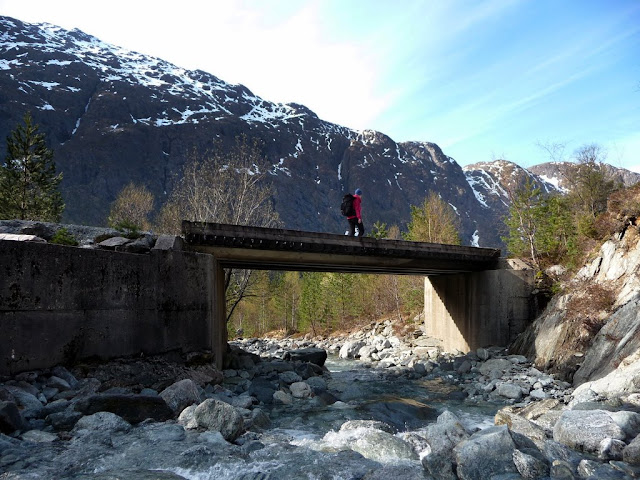 Fantastic pictures. Nice to see that the spring is here, also in the mountains.
Love the yellow shelter.

Roger - thank you, as ever Mother Nature supplies the beauty, I just point and shoot with my point-and-shoot picture box and hope for the best. Spring is here but it's still very early in the season and there is a lot of snow around still. There were places where we should have maybe had crampons and ice axes but used judgement and extreme care instead. It did feel good to traverse this kind of terrain in trail runners and an ultralight pack. The yellow DuoMid is still making smile just thinking about it, it's such a 'happy' place to be!

Great report! looks like a really nice trip. I just got back from my 24-trip which ended up being a very wet experience - great for testing rain gear though :). Will post a report tomorrow.

Thomas - thanks, it was an awesome trip. We were lucky with the good weather. Looking forward to hearing about your adventure.

The yellow DuoMid is really beautiful, good choice, Joe. Was it spacious enough for the two of you? And are you going to take the DX stove to Sweden - I'd really like to see it, so if you don't mind, bring it along ;)

Hendrik - I'm glad I bought the yellow DuoMid, it brings me such joy! I'm lucky that I don't have to worry about stealth camping here in Norway! It was big enough for the two of us to sleep but we wouldn't want to spend a long rainy day in there waiting out a storm. If I was to buy a shelter specifically for two people on a long trip I would size up and get the SuperMid.

Oh yes, the DX is coming to Sweden. It will be good to compare it to far superior wood burners such as the BBU and Ti-Tri. Hopefully it will be just enough to give me a hot cup of coffee each morning!

The DuoMid just grows on me more and more. Great photos and nice mountains. Good shake down.

Found out that the DX in shop in Gothenburg. Will buy one tomorrow. And then make a small test one afternoon this week. Then it will be my stove at my weekend trip in Skåne.
Will report :-)

Martin - Thank you. The DuoMid is a winner in my book. Simple, light, modular, adaptable, proven. I've only used it for these two nights in good weather but it's pedigree fills me with confidence.

Roger - it's THE stove of the moment. Lets hope Evernew got it right.

Cracking pictures. that first one looks like a product shot =]

May has been a non event so far for me. Working on some plans to get myself out in the new shelter =]

Fraser - thanks! The yellowness lends itself to nice photos, especially in sunlight.

Nothing like a new shelter to inspire an adventure.

ooh, you're giving me itchy feet with all this camping lark! i'm really looking forward to your uber lightweight meet-what an ace idea. hope to glean some more kit ideas from ya'll :)

The Meet-Up will be a gear apocolypse!

Dear Joe,
My first post on your blog, although I think I've read pretty much all of it.
I am planning on coming to Scndinavia in May for 2/3 months of wandering, and was curious how the Golite quilt stood up to the summer temperatures? I was interested in mooching around in the far north as well as the south so was worried about it's -7 rating for the southern parts of my trip, would you say it is superbly wasy to regulate it from -7 to say 10? (I was also considering a Scarp 1 with mesh inner, with crossing poles so either could be pitched).
Yours
Wilbur

Wilbur - the GoLite quilt will be fine in summer. Yes, it's very easy to regulate the temperature if it's too hot. Just lay the quilt on top of you instead of 'tucking yourself in'.

A word of warning too though: May in northern Scandinavia is not warm and you can get some pretty cold night time temperatures. As others will I'm sure agree, the 20F rating of the Ultra 20 quilt is fantasy. I've always said it's nearer to 30F and will always carry an insulated jacket and merino long underwear in summer just in case I get a night that dips below freezing. I hope that helps. Have an awesome trip!

Dear Joe, many thanks for your advice, much appreciated.
I think I'll combine the quilt with a Montane Prism jacket.
I think as well the newer quilts have about 2/3 oz more down inside, where was it... yup, 9.5oz for the old one. 11.8 for the new one. total weight of 690-710g. Which made me worry about boiling in the summer.
Oh btw, looking at Rab I think they've pulled the Alpine Pull-on you have and replaced it with a jacket,
http://www.rab.uk.com/products/mens-clothing/soft-shell/alpine-jacket_1.html
Thanks again

Wilbur - no problem, happy to help. I carry a similar jacket in summer - the Rab Xenon but I also carry a very light (195g) fleece vest (better as 'active' insulation in wet environments). Combined they weigh a smidge under 500g but offer a couple of options for different conditions.

It's a pity about the Alpine Pull-On getting changed, I prefer the smock design in winter but the new jacket version is probably less 'niche'. It's still looks like a great winter wind-shirt. Thanks for bringing the change to my attention.