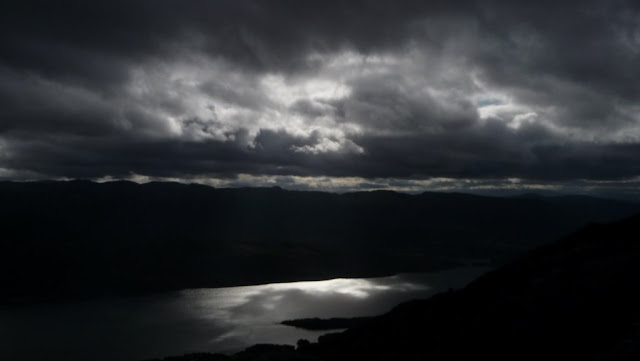 Need to get out again. I picked through some dog-eared maps, still my preferred medium of surveying the land. I kept coming back to one map. I had been to Sveningen a couple of times this year already. The first I was thwarted from getting to the summit by stubborn snow pack. The second a slightly abbreviated tour, taking half the main ridge but missing the summit. But I like it there and it's accessible, even to people who don't have a car. I walked 25 minutes to the bus station, waited 5 minutes and hopped on the 600 bus.

Actually I was supposed to leave the day before. There was only one thing stopping me, the forecast of thunderstorms. I nearly just went for a quick over-nighter in the 'backyard' but when the storm hit I was glad I was spending the night at home, watching the deluge and lightning from my sheltered balcony. 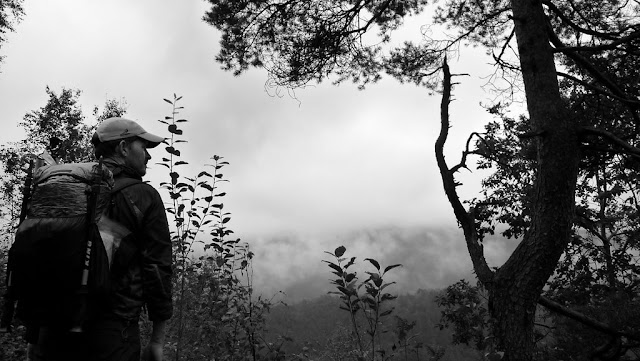 The weather when I got off the bus at Syfteland was better but only slightly. Low cloud, light rain and oppressive humidity. The hour long walk-in to the trail wasn't so bad. Pretty flowers, toads, Highland cattle, bubbling streams and a light pack. I was certainly having more fun than the soldiers, exercising in the area. A few of them passed me along the road, 'yomping' along under mammoth packs, guns slung around their necks, leather boots, with a baying officer inches from their ear. Miserable, pain-filled faces. 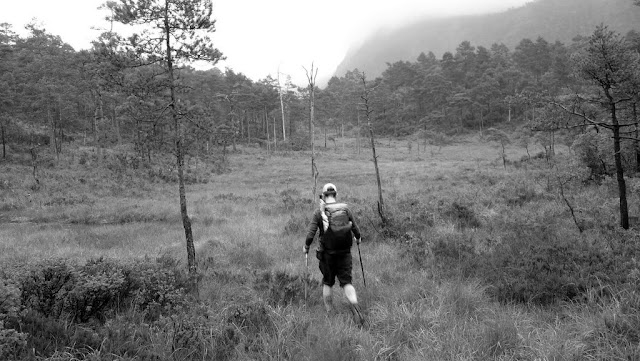 Tarmac gives way to gravel paths and in turn these give way to bog. Something in between would have been nice. This stretch of 'trail' is marked on the map but the reality is that you have to just head 'in that direction', straight down the valley. I've walked this before, trying to stick to the higher ground but the going has been slower due to the vegetation and your feet get just as wet in the lower areas. Better just to suck it up, get your feet wet and plough on in a straight line.

After the bog there is forest track, heavier rain, soldiers crossing a lake in the buff, floating on their packs. Another short stretch of road with no sign of life except noisy farm dogs, heralding my arrival to anyone who might be in earshot. Back in the forest the gravel paths speeds me upwards, hand-railing the Sveningen ridge still wreathed in impenetrable mist. I have ideas about camping at a small lake at the actual base of Svenningen I had camped at before but through a gap in the trees I spot a likely spot on an island in the river. The low, late summer river, braided and meandering here, runs down the middle of the valley. It comprises more of gravel bars than water at this time of the year so crossing it was an easy splash through crystal clear water. Tiny trout scatter in my wake. 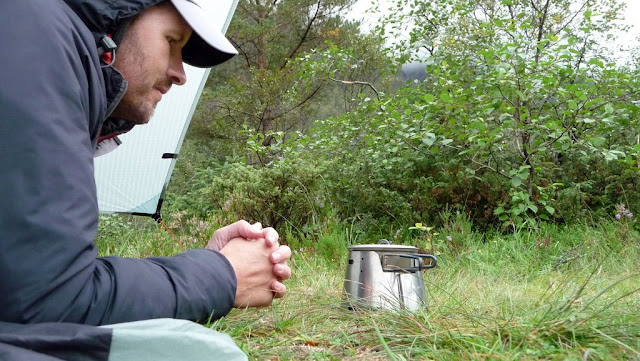 The area I pitch my tarp in has seen quite a bit of action. The ground is firm, the grass's knap nibbled short by sheep. There is a fire ring not to far away. The perfectly level ground and good soil means my tarp goes up in absolute perfection. Barely a crease. Drum tight. Camped earlier than I expected I while away the evening with my camera, endless cups of tea and the entertaining fingerling trout, oblivious to the giant sat above their pool, watching them. 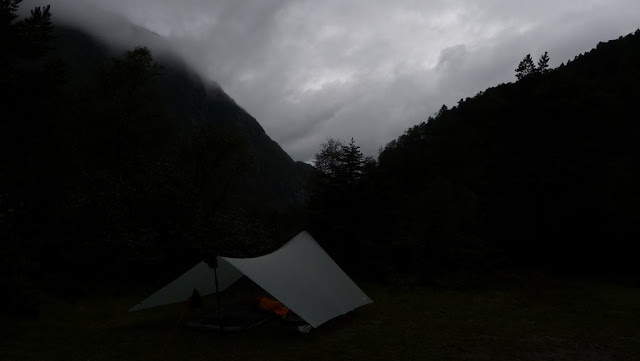 The sky to the south, over the Svenningen ridge, is moving fast. Roiling mists give way to blue sky, moments of sunshine then black clouds, all in the space of a few minutes. Cosseted in the valley my tarp hardly registers the wind howling above. I slept well although the ground wasn't as forgiving as my grassy mattress on the last night I slept out. During the night a bit of a squall comes rolling up the valley bringing wind and rain. I hadn't expected this and not from this direction. I had oriented my tarp to give a pretty view instead of weather protection. I contemplate moving the tarp in the blackness but instead I simply deployed my umbrella at the entrance and pegged it to the ground with the only thing I can find within reach. My spoon. Comfort restored. 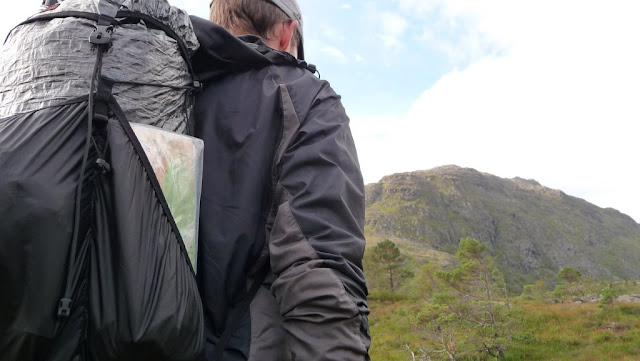 I was thinking of getting an alpine start  (my way of mitigating not being able to sleep in any camping situation) but instead I woke up at a perfectly reasonable hour to fairer weather and hunger. Coffee, oats and some stretching and I was ready to pack up. Minutes later I was getting my feet wet again, re-crossing the river back to the trail. Half an hour later I swung right and started up the steep, slick ramparts of Svenningen proper. 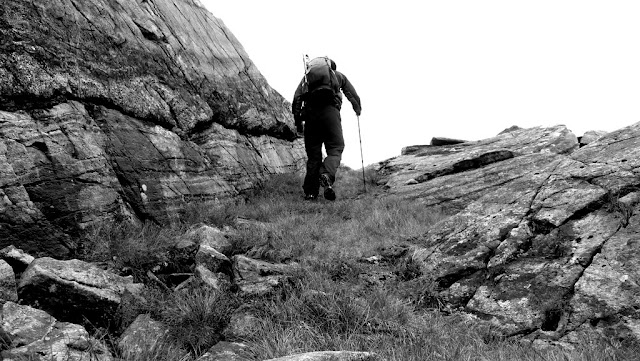 The wind rises in correlation to the altitude I gain. Funnels of grass and mud between fins of slick rock. Hoods up, hoods down in answer to the changing micro-climates of each contour. Not a soul in sight. At the tiny, grimy hut, just below the 843m summit, I stop for a snack and drink. I pull on extra layers and swap my sodden wool socks out for some thin liners and neoprene booties as an experiment. 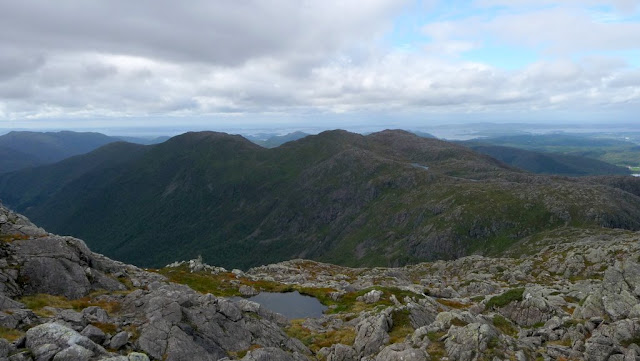 The Sveningen ridge curled away to the south-west. A good few hours of changeable under foot conditions lay ahead but a constant in the quality of views from it. I just hoped I wouldn't take the wrong trail at the end again and get lost in the forests. Poles stowed on my pack I began picking my way down off the summit hump and onto the ridge. 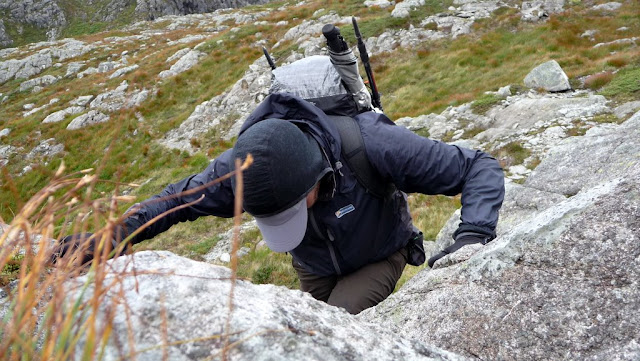 It was fun to walk the ridge in the opposite direction, down-climbing the few steep sections and crossing small cols than when snow packed had seemed so potentially dangerous last time. No gliders above though this time. The raging wind was probably too much for them. At times it was too much for me, catching my breath in my chest and blowing me off balance. 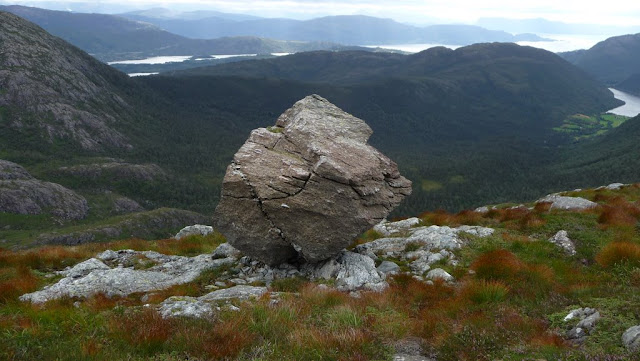 Lunch of warming soup in the lee of one of the rock fins that draped across Sveningen's back. Back on with the gloves and extra layers. It's still August but the best of summer has come and gone. Heading down the nose of the ridge my mantra was "don't fuck up, don't fuck up" as I promised myself I wouldn't miss the turning that led to the incongruous ending to my last trip along here. When I got to the decision point I still wasn't 100%. I knew which way was the 'wrong' one but the 'right' one didn't look good either. Taking a compass bearing I took one last look from above the tree-line and dropped down into the trail-less vegetation.

Bush-whacking my way across three small valleys and their corresponding ridges was hot sweaty work. I picked up faint deer trails periodically that seemed to be heading in the direction I wanted but saw no shoe/boot tracks or the usual paint or ribbon markings on the trees. Sometimes the trails swung away from my bearing so I left them. A little concern welled up inside me. This was taking some time. I stuck to my guns and compass bearing though, glad not to have anyone with me to worry about as I pushed through thick bushes and slid down steep rocks. Suddenly the forest changed into pine. Pine planted in straight lines. Then I saw a path, running perpendicular to me, just across a stream. I bounced across to the other bank and relished the firmness beneath my feet. With a smug grin I began my easy exit. I was pleased with myself for sticking to my compass bearing instead of blundering my way out of the situation. Oh, and the icing on the cake? As I left the trail-head for the hour long march along tarmac roads to the bus stop a car pulled up alongside me. The driver enquired where I was headed. Bergen I told him. Jump in, that's where we're headed. Alright!

I guess this trip may be one of the last this year with such a small and simple pack. Falling temperatures and different weather extremes will soon require me to carry more gear to stay safe and comfortable. In light of this I thought I'd just share with you the gear I took on this trip and that I've been taking on several trips this year. The excellent Thinglink plug-in will guide you through the contents of pack in the image above (missing from the picture is my camera and last minute inclusions of my umbrella and a Laufbursche hip belt pocket worn on my belt) I've been pleased with the simplification process my pack contents have been through this year. I'm pretty much there with how light or simple I want to go in the conditions I normally travel in. And only two stuff sacks...

I guess my new pack will be what a lot of people are interested in. The Laufbursche huckePÄCKchen in black cuben fibre has arrived a bit late in the year to get the most out of it's compact proportions but it will remain as my day pack throughout winter on everything apart from ski trips. The quality of build, attention to detail and the semi-custom service have all been alluded to before. I will only echo everyone else's praise. I haven't lived with this pack long enough to offer any reliable feed-back yet but so far so good. And as Martin Rye pointed out, for such a ridiculously light pack it LOOKS like a backpack, not a crisp packet.

The big experiment for me were the NRS neoprene socks. Paired with a thin liner these things blew me away. So much so that I am moved to write a separate post about them. For now, all you need to know is these things rock. So much WARMTH! For anyone shunning GoreTex lined footwear for any reason, these socks will become your best friends as we say goodbye to summer.