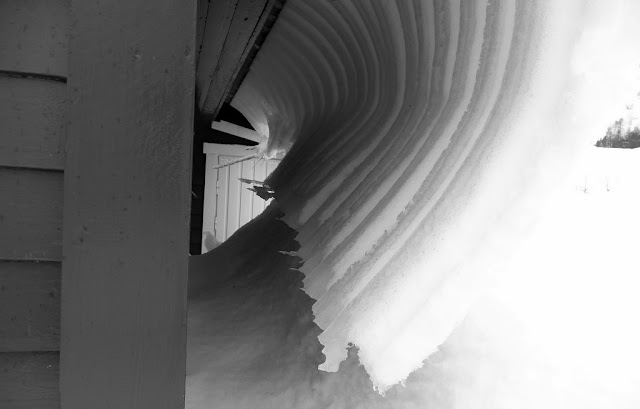 January was a write off. Hours after my last day ski trip I was flat out on my couch with a cold. A week later I was suffering from a sinus infection that gave me a constant headache, toothache and earache. Working as a substitute meant I still had to go to work at the school when they needed me but the rest of January was spent watching winter pass by the window from the warmth of the living room.

As a result I am well behind on the number of days I've been out on the planks. This time last year I had already clocked up over 30 days of skiing. This year I had managed just 2. Thankfully February bought better health and I vowed to make a real effort to get out and make the most of what winter was left. First order was just getting back out and sliding along. Thanks to the wonders of public transport in Bergen this means a days skiing is just a short ride on Skibussen away.

The weather forecast wasn't good, a prediction confirmed by the few dedicated skiers and boarders dotted around the empty seats on the bus. The first stop is the lift-accessed alpine thrills at Eikedalen. Here the bus emptied almost completely, save the bus driver and us. Last stop is the far quieter Furedalen. Our arrival was greeted with a member of staff informing us that the cross-country trails had not been prepared that day due to a broken Snowcat. We might not see many people on the trails today. If that comment was supposed to put us off then he obviously doesn't know us very well. 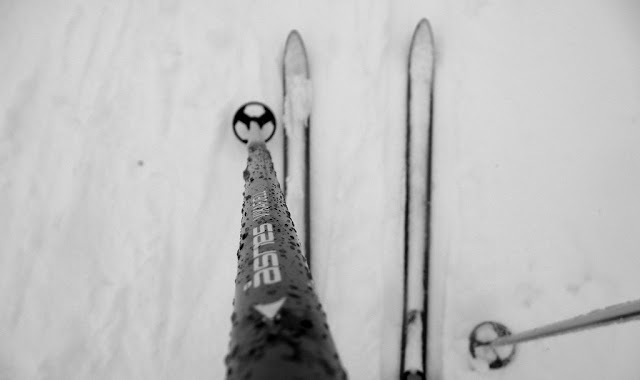 We explored new trails and revisited favourites. We went up. We went down. We went up again and then up a bit more. Eventually we slid all the way back down, reduced to having to feel our way through the flat light and featureless snow. Back to the cafe at the lift base for hot dogs and chips. We had battled hail, wind, wet snow and white-out. We had flexed tight muscles and loosened rusty skills. Back on the bus we enjoyed another benefit of public transport, the ability to nod off with a smile of your face, awash with endorphins. January had been a write-off but February is shaping up nicely already.

Nice one, Joe. Glad to see you getting out there - I've also been struck by the cabin fever feeling. Love that last photo, too.

Sam - the broken Snocat might have been a problem for the racer boys but that suited us just fine.

Mark - it was funny how easy we could lose sight of each other in those conditions in such a benign environment as the trails of a resort.

Great stuff - good to see you out on the slopes again.

That last image is a corker. I want some o' that!

You really need to get out more, Joe! And teach those kids to wash their hands before class starts, and to sneeze & cough into their elbows!

Definitely jealous of your winter weather and snow.
Here in Switzerland, we have none of those things. :-(

I really like the pic with the skier disappearing over the edge.

Thomas - it's good to be back

Dave - thanks. Yes, I could do with some more of that too!

Hendrik - I agree! And the kids are good but every now and then... ATCHOOOO!

Karl - thank you. The weather in the city has been appalling compared to last year's winter wonderland but at least there is snow in the mountains just to the east of here.

Hey at least you still have snow! I'll be out this weekend rain or shine, besides, I have some new gear to try out!

ace! glad you're better and making full use of snow fun. last pic is brill too :)

Got my first ski trip to Bulgaria next month. The only thing I'm worried about is the cold!!

First time visiting this blog I think (pointed in this direction by Mr Morkel's excellent Week In Review). Fantastic pictures - really atmospheric and wintry. Good to read you've got out and about. I look forward to seeing more deep and wintry trips.