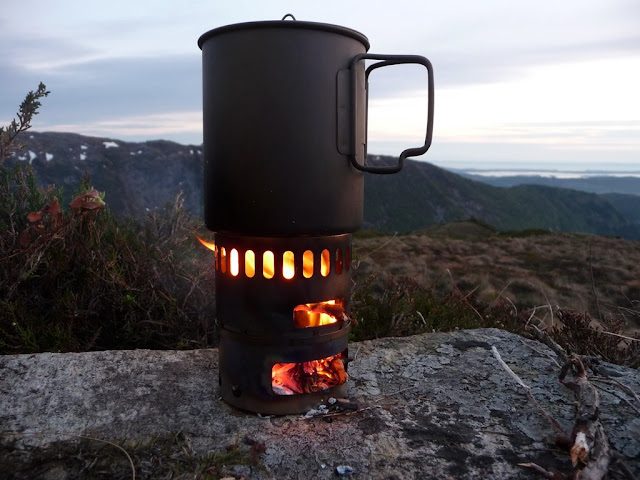 No other stove has garnered as much hype in the UL community recently as Evernew's Ti DX. It promises much. Multi-fuel versatility, ultralight and importantly for me, compact enough to sit inside my cooking pot without the need for things like caddies or extra stuff bags. Elegantly manufactured from titanium in Japan the finish is sublime. The whole thing packs down to sit in the bottom half of a typical 700ml pot leaving plenty of space for folding sporks, your choice of fire starters and kindling. It weighs 86g for the upper and lower rings, 'Power Plate' and the Trangia-inspired alcohol burner. In fact you can find all the fine detail on Evernew's website so I can spend more time telling you how it worked...

I've had a chance to use this little stove in two of it's three guises, as a wood burner and as an alcohol stove. It will also burn solid fuel 'Esbit' tabs but they are proving a little hard to come by over here and the two tabs I do have left I'm keeping as emergency fuel back-ups in case I run out of alcohol or can't find any wood dry enough to burn.

I bought the Ti DX to use primarily as a minimalist wood burner and the first time I got to use it was a pleasant, warm, dry, over-nighter, up above the tree-line. There is still a bountiful supply of fuel here but you have to look harder for it. Dry, dead heather stalks and alpine berry stems are hidden below the undergrowth and offer more than enough combustible material and a couple of handfuls will easily bring a 700 pot of water to a boil. 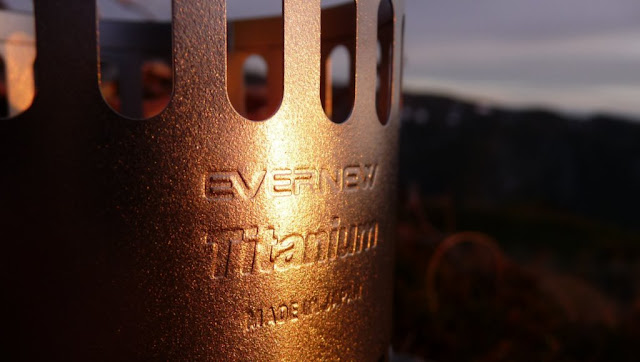 With a single match and a pinch of pocket-dried birch bark as tinder the Ti DX was soon burning nicely. Unlike other wood burning stoves it does need a little more attention as the fire box is small but when time isn't a priority it's actually an enjoyable task, feeding the flames with pencil sized morsels through either of the slots. It pulls air in easily enough through the perforated 'Power Plate' acting as a base and the circular holes around the lower edge. The slightly golden finish of the titanium when new was soon lost to it's working uniform of blued metal and soot but it's a fine looking unit when flickering away with orange flames.

When I took the Ti DX on the Scandinavian UL Bloggers Meet-up in Sweden the unit, in stripped down, wood-only, 52g guise, was up against some difficult, wet conditions and superior wood burners. The gold standard of UL wood burners is currently the highly regarded Bushbuddy and next to a couple of those, with experienced users, the Ti DX struggled to match their performance. It took a lot longer to bring water to a boil, sometimes marked by my friends happily starting their dinner while I was still waiting for water to boil. If you travel alone and time is something best spent enjoying the task of feeding the stove then this is of no consequence but in Sweden we travelled in a group and during short stops in bad weather it's time-consuming action made breaks longer than necessary. The Bushbuddy is, however, heavier and requires a larger, heavier pot for storage, around the 900-1000ml range, something to bear in mind.

The alcohol burner is neatly crafted and resplendent with metric and imperial fuel volume markings. It sits in the lower ring and the 'Power Plate' can be sited on top. I'm not analytical enough to run dozens of tests to ascertain it's fuel consumption scientifically (thankfully people like Dave are) but in use it doesn't appear to be the most miserly of units, using around 35ml of fuel to boil 600ml of water compared to about 26ml of fuel in my Super Cat stove. On a long distance hike, using just alcohol as a fuel source, this could be significant.

So while the Evernew Ti DX has some serious advantages like ultra-low weight, superior compactness and versatility over some of it's rivals it is not without a few niggles. Thirsty in alcohol mode and a little slow and fussy when burning wood it comes down to the individual to decide if the advantages outweigh the minor disadvantages. The answer to our quest for the ultimate do-it-all UL stove? Maybe believe the hype. 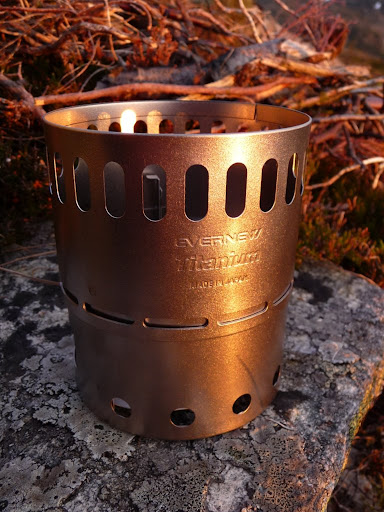 All comes down to what you want from a stove for me. Weight is not the bottom line. Some people don't care about boil speed time. I do when its cold and your mates have already downed a cup of soup and you are still waiting for 400ml of water to boil. If your super cat works stick with it. The TI DX looks good but out on the hills in the rain and cold will it delver for your big summer walk day after day? Are those niggles worth it to you Joe?

As you know I've been waiting for your feedback on this. Interesting balanced review but it doesn't give me a sense of whether or nor you'll be taking it north with you this summer. Mine is staying on the shelf until I get a better feel for it. In my case first impressions weren't good but I'm holding back on the final conclusion until I've played with it some more in all it's modes.

I'm a fan. I like the weight and the versatility. With an MSR Titan Kettle it boils 500ml of water in 7mins, using 40ml of meths, in cold weather with a 5g cooking foil shield held together with a paper clip. A solo weekend trip requires 120ml of meths (96g in bottle). The time it takes does not matter to me and the whole set-up is less than 300g inside the Titan Kettle (which is also my mug). I like it a lot.

Could you use the cat stove to replace the alcohol one in the Evernew? Get the benefits of using wood and the efficiency of the cat alcohol burning ability.

Martin, Dave, Maz & Harttj - thank you all for your comments. If my review seems slightly ambiguous then that is probably a fair reflection of my feelings toward this stove. Martin, I agree, boil times don't matter to me unless it's winter (when I'd switch to gas) or when travelling in a group (which is rare!). Compactness means more to me than absolute weight when it comes to my 'kitchen'.

The Ti DX would, I feel, cope perfectly well with conditions on a long distance, Artic adventure, whatever the weather threw at me, as would my Super Cat, Andy Skurka has proven that (rumour has it BPL will release a titanium version soon?!...). Harttj, I'm not sure if the Super Cat would fit in the DX (I will try later) but I think the Super Cat works by having the pan sit directly on the stove which creates the 'pressure' that allows the side jets to bloom.

I am, however, now totally committed to using wood wherever & whenever possible for cooking. The wet, windy weekend in Sweden with my fellow Nordic Lightpackers showed me that it was possible and I learned a lot from Hendrik and Gustav. As such I have been looking for a primarily wood burning stove, with the ability to use other fuel supplies as a back-up. I'm also looking for a stove that fits into the 700ml pots that I now use, all of which has lead me to chose a Four Dog Bushcooker LT1. It comes highly recommended and looks very well made. I will be ordering one this week and will post a review in due course.

My current meths stove are a Caldera for a Titan pot and a Heineken pot one. Both boil 500ml on around 25 -30ml of meths The Evernew is doing 40ml of meths. That is poor. Super Cat is simple and I would make one if I wanted to use a meths stove again. I like your reasoning Joe. Make a decision based on what you want from a stove on a given trip and stick to it.

Superb photos. I tried photographing my Ti DX and have not got close to what you have achieved. But you did not photograph the welds in the two stands. After all the talk of Evernew quality, I was seriously underwhelmed by the two small spot welds which fasten the two sheets of titanium into the circular upper and lower stands. How long will they last?

Your comments on the performance of the complete package as a wood burner and as an alcohol burner are exactly what I have found. It can be used to burn wood but is no match for my Bushcooker. In its other role I found it to be the most powerful and hungriest alcohol stove I have ever used.

I am planning to use the Evernew kit for a four week walk in July/August so will discover the hard way whether those weldswill hold, whether it is worth bothering with as a wood burner and whether the alcohol consumption is too punitive.

Thank you for the review, John

Martin - I've always shied away from committing to using wood, believing that it was not viable in the more 'alpine' environs of the higher Norwegian mountain plateaus, even though I'd seemingly always found enough 'wood' to build small fires. With a little 'training' from Hendrik, Gustav and Jorgen I've discovered it quite easy to get a fire going, even in wet conditions. I like the idea of not having to worry about fuel so much, beyond a couple of emergency Esbits.

John - I'm sure those spot welds will be fine. Even stoves like the Four Dog Bushcooker LTs seem to be made that way. But I know what you mean, they look 'minimalist'.

Be sure to drop by and let us know how the stove performs on your trip.

A very good report Joe with fantastic photos, having watched you use the stove on the recent trip to Vålådalen I am still attracted to the stove as I can see its potential, and given Fenlanders experiences with metho it may be possible to reduce the fuel consumption figures. I too would love to try a pepsi can stove when using metho, my guess is it will work just fine, just slower.

Wood is on my to do list after lapland.

Roger - thank, I think the beautiful sunset helped with the photos, giving the stove a lovely golden burnish.

If you're on your own and not delaying a group of damp backpackers I think the stove in wood burning mode is great. Sure it's slow and needs some TLC to stop it going out but that is part of the charm of cooking with wood for me.

I did try the Super Cat with the DX and it does fit inside, sitting on the Powerplate at the bottom of the stove. As expected this doesn't allow the Super Cat to 'jet' and acts simply as a meths tray. It still works, just less efficiently.

Thank you for this review! Do you have thoughts about the Vargo hexagon? That, too, can incorporate an alcohol stove, might make for an easier fire, and weighs 4 oz. Your opinion is appreciated!

Thanks! I hadn't heard of that stove! Now to go research...

Michael - you can read my review of the Four Dogs Bushcooker LT1 here: