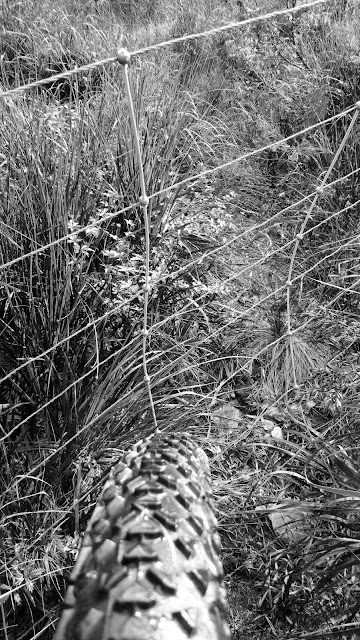 Access denied. A very new and shiny plastic fence blocked the faint path to the stream-side fishing hole where I planned to while away the evening in the pursuit of trout and then cowboy camp in my bivy bag. Quite the anomaly in Norway, it has to be said.  No fear, a quick one-eighty and an alternative secured. Fun through the forest trails. Slow and deliberate around the protruding rocks, straight through the mud bars.

Fortuitously, someone had left several sawn and chopped logs at a neighbouring campsite. I flip-flopped through the riparian brush and across the stream. The water was silky and warmed with summer rain rather than the previous snow-melt. Firewood secured, I gathered twigs for cooking and tried to lure a trout from the lake to add to the couscous instead of the sachet of lemon and black pepper tuna. While fingerlings took flies from the surface in the shallows I couldn't tempt their parents with the clumsier lure from the depths. Tuna it was.

After ensuring the fire's embers were fading safely, the short Nordic night was slept away under some nearby trees where the ground was less packed by generations of feet. Dusk slips almost unnoticeably into dawn. It seems like ages since I've seen the stars, another reason why this slow descent into the colder season holds no fear, just more opportunity.

Waking up to fog and a fug of no-see-um's it was no hardship to get out of bed, spark up the stove and put the coffee on. Leaning back against a log I ate breakfast, briefly contemplated more fishing but decided to strike camp. Bikepacking with such little gear (BUL?) meant I was able to ride almost uninterrupted back to the road, just a couple of rocky stream crossings to negotiate on foot.

Oh, and I forgot my spoon. Again.