Time to get some hiker miles in the legs with imminent trips stacking up just over the horizon. A full weekend away was cancelled when my best friend needed help repainting the outside of his house. The housing co-op only had the scaffolding up for two weeks so the weekend was busy with each house-hold calling in favours or bribing friends and family to pitch in with scrapers, wire brushes, paint brushes and rollers. I was happy to help and enjoy a job when you can stand back at the end of the day and go "I helped do that". As remittence my buddy offered me a lift out of the city so I could get in some 'up-and-down' and a night under the stars to boot. 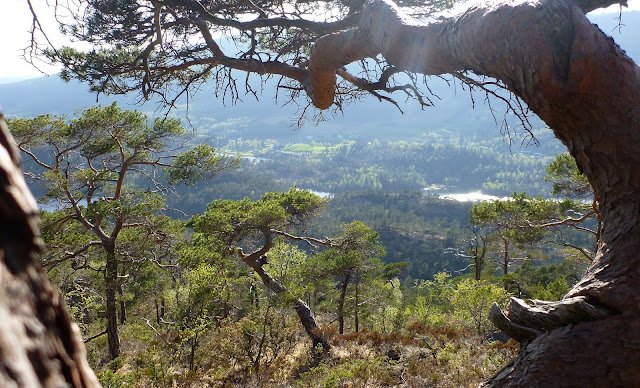 Smeared in paint and already a little beat but eager to get going. Despite the day's late hour the walk up the Hisbotnelva ridge was sweltering. Sweat poured. Trees cracked. Nothing moved. Except me. Slowly. And with ever decreasing increments between rests. The sun shimmered off the lakes and rivers as I left them far behind. All I saw was the footholds in the steep trail or the grey of the solid granite slabs that form several sections. 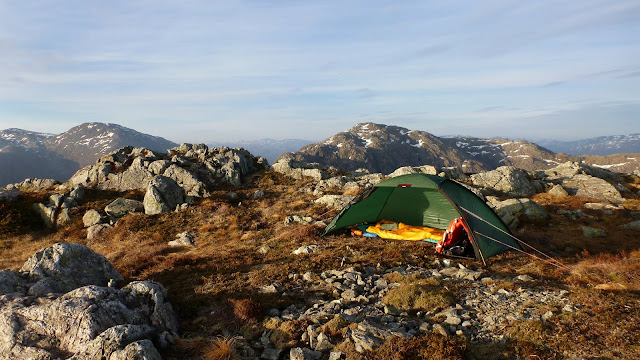 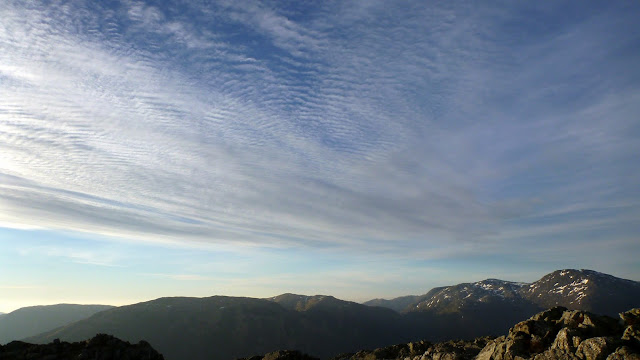 The views were fantastic. Giants, snow and glaciers to the south, mean monsters right next to mine, the fjord and finally the folded hills towards the city. Even the mackerel sky that stretched above me offered choice viewing pleasure. 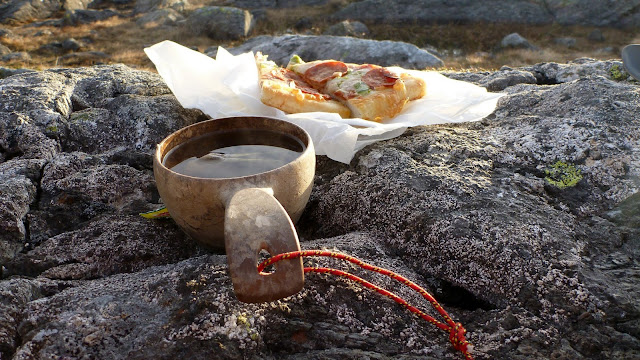 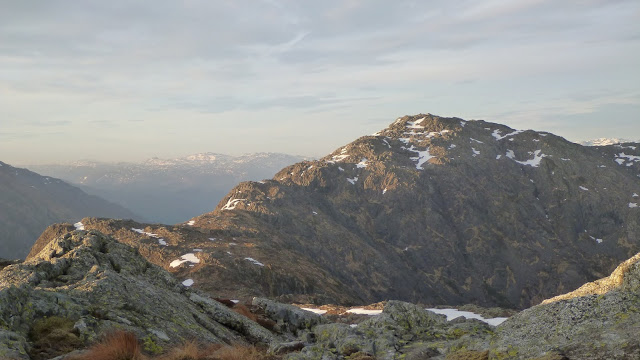 No 'hiker TV Channel 1' tonight but I was spoiled for good viewing. The falling sun cast shadows and changing hues on every surface. To the east, the stepped approach to Sveningen's true summit came into shadowed relief. That could wait until tomorrow. 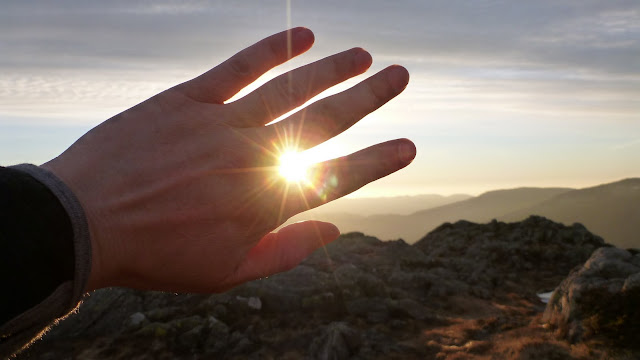 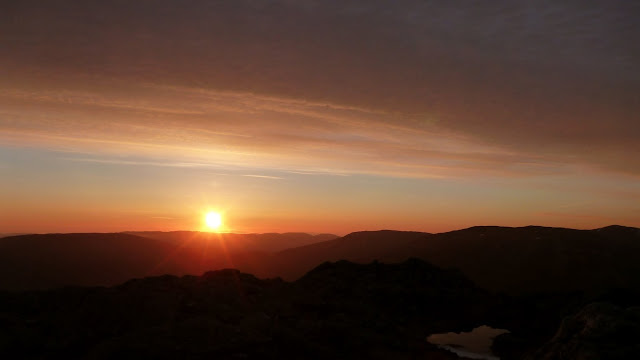 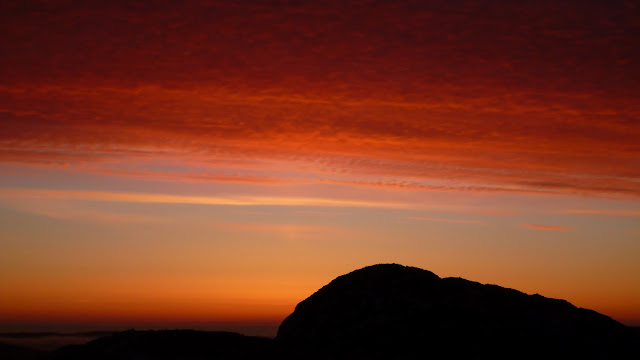 The evening light show was exemplary. Blue, golds, reds and finally into purple. The temperature fell but it remained comfortable to stroll around my slice of heaven, my scratchy eyes pulling me towards bed while my sense of wonder kept me up past my bed time. 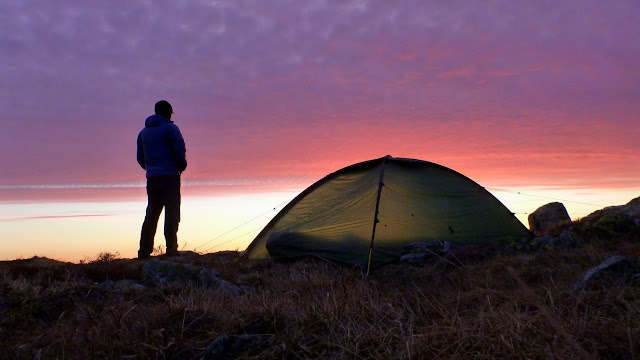 Solid nights sleep. Absolutely solid. Yesterday's toils and comfortable surroundings meant I crashed hard as soon as my head hit the pillow and didn't surface until I was fully recharged. No dreams, no moving. Lights out. 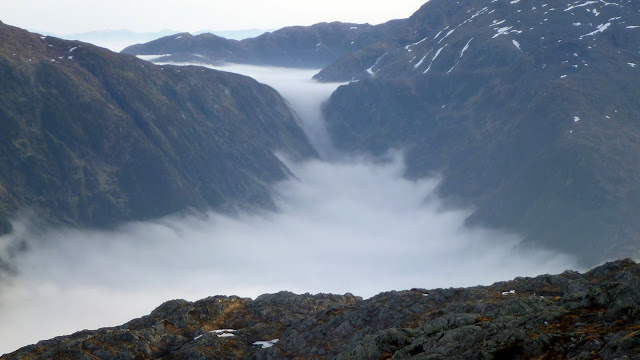 First view out of the open zip was of a full cloud inversion. I was up and out of bed in seconds, grabbing my camera and running around my little plateau marveling at the different views. The bigger lumps to the south were just islands in the sky. Cloud poured down a couloir opposite. 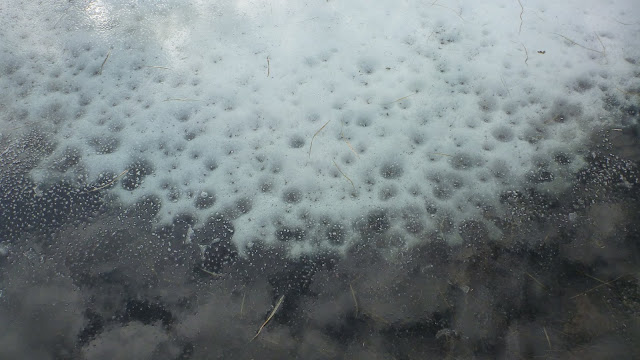 Breakfast was taken on my new balcony looking south towards the interior. With no running water I trusted water from the still frozen ponds to rehydrate my muesli and milk powder and pour through my coffee filter. Water Boatmen bobbed through the warmer margins. 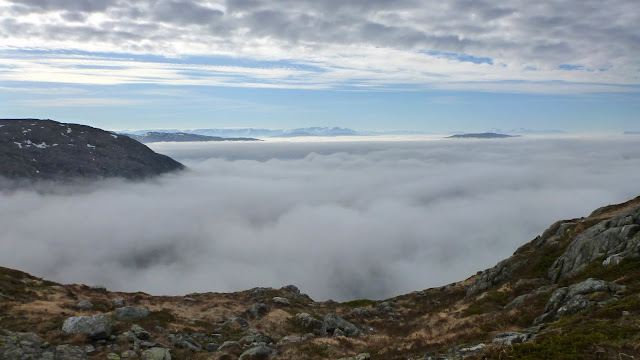 The flattest part of the trail so far was the ridge running from my camp to the steep approach to Sveningen. Punctured with snow fields I actually got to use the crampons I had lugged all the way up here.

Sveningen's steps required finger tip scrambling, as in, I could walk most of it with just the occasional finger tip on nearby rocks to steady myself. Just in a couple of spots were all four points of contact required. Bizarrely, the route to the summit travelling this direction isn't marked but the route down is clearly signalled buy white squares painted periodically on the rock. I guess if you wanna get to the top you just keep going up until there is no more up to be had.

The summit was quiet, still and sublime. More snow than rock, the safety hut was snowed under. I mixed water, snow, hot chocolate mix and a coffee sachet for a mountain frappuccino that was sunk fast. I scribbled my name into the notebook, locked away from the elements in a Pelican case and stored inside a post box that looked like winter storms had been tearing at it for six months, lid missing, paint rapidly following.

Heading down I 'ski-ed' on my forty six and a halves down the gentler snow fields and picked my way on hands, feet and occasionally my butt down the truly steep stuff. The forest jeep track down the valley was hot and dusty. The 8km tarmac road back to civilisation was tender footed, sun-burned hell. With 'No service' blinking on my phone all the way along Hausdalen I wondered if I would have to walk the entire way home. Thankfully by the time I hit the main road I had 3G and within minutes an air-conditioned, leather upholstered, eight seater Mercedes taxi picked me up. The taxi driver was deep in conversation with someone via his Bluetooth earpiece so I started the process of reliving the journey early, clicking through the images on my camera and smiling. 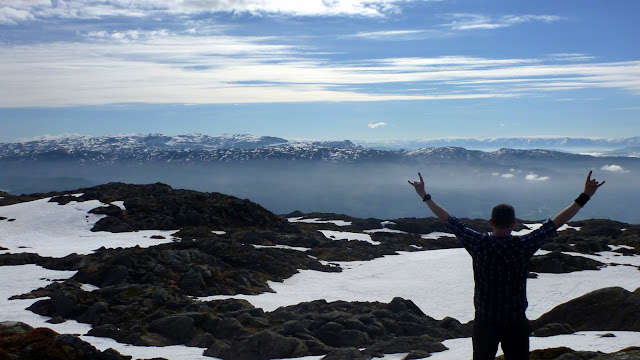