Anatomy of a snowstorm 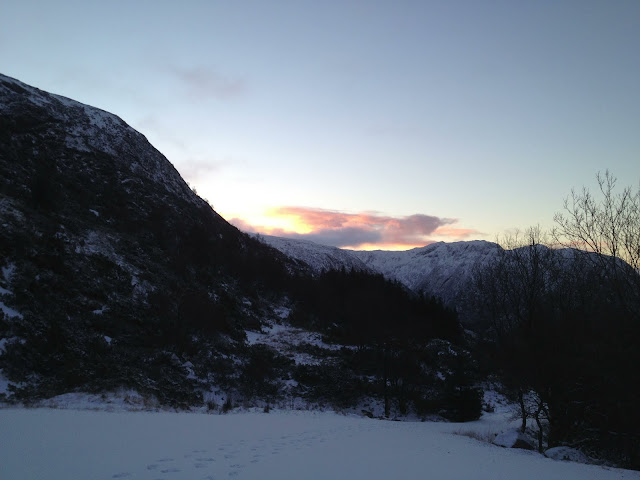 The justification for running this short photo essay is simply that I had a good time and snapped some fun images along the way. It was nothing more than 'training', a quick 13km blast from my front door to the summit of Rundemannen (568m) and back, hence I wasn't carrying a 'real' camera. I did have my phone with me to log the activity so I started snapping as the fun started. The images here are all unaltered so I apologise for their technical quality.

A smattering of overnight snow over weeks of compacted, partially thawed, then refrozen ice made for a slippery scramble around Svartediket and up Tarlebøveien to the second reservoir. I wore my Icebugs and the only other footprints in the snow both sported the tell-tale tracks of Microspikes. When I left my house it was still kinda dark but as I hit the second reservoir I looked over my shoulder and saw the early morning sunshine painting the few clouds pink. 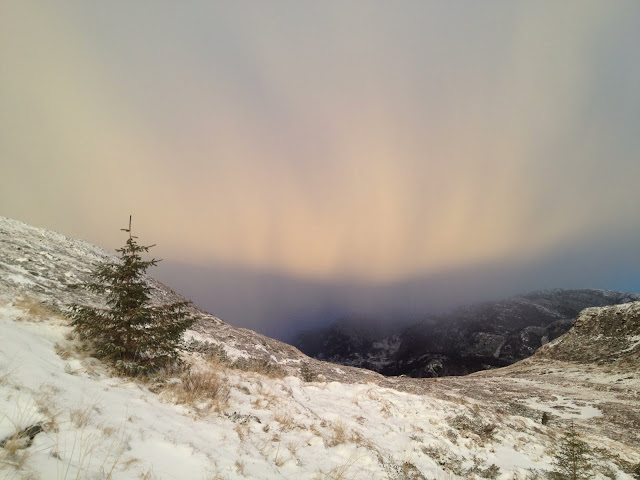 Walking up through the last stands of trees an eerie light cast a sickly, tungsten bulb hue across the snow. I know that light, I thought. Snow's coming. I looked up and sure enough thick clouds with a hint of orange welled up from the fjord below and over the flanks of the hills. The morning sun cast the hillside's own shadow across the impending maelstrom. 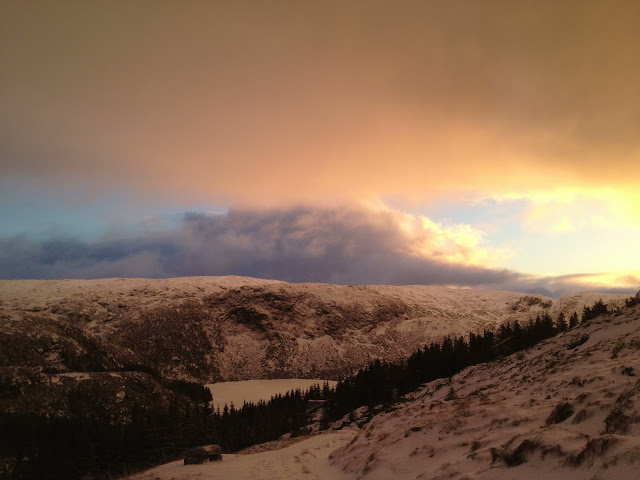 On the final portion of the path to the summit now I spun around and looked back down the route of my ascent. The cloud rolled over my head and started to squeeze the blue sky against the mountains. 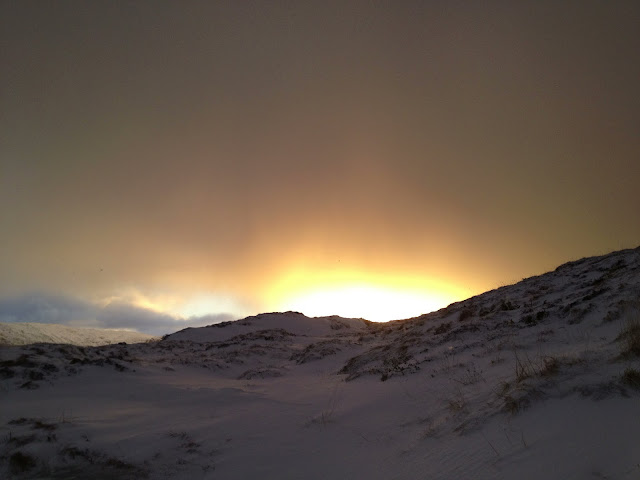 Even the Sun couldn't hold back the descending curtain. The wind picked up and the odd snowflake started to spin and skate through the air in front of me. 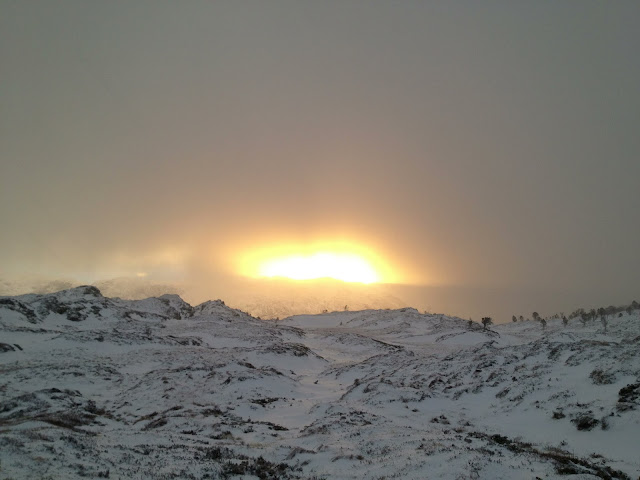 At the summit I gazed across to the other side of Vidden's crescent and watched as the snow and cloud continued to crush the Sun as if it were merely a faltering match head. Soon even the dying orange of the Sun's final resistance was snuffed out. I pulled out another jacket and microspikes from my pack for the descent, drained the solbærtoddy from my water bottle and turned back into the racing cloud. 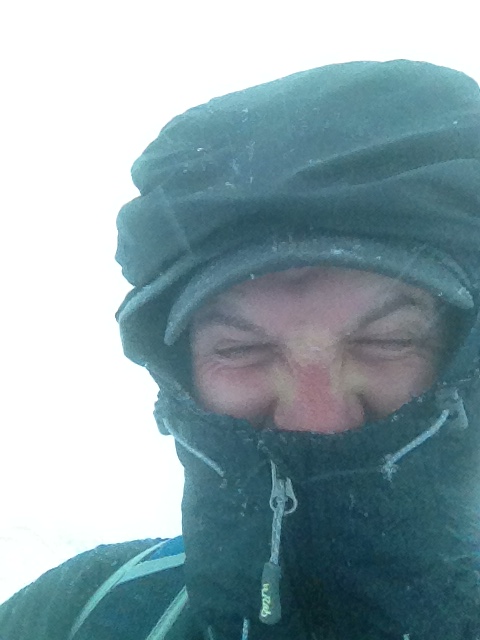 WHUMP! Wind stripped my outer layers of heat and stinging snow violated even the cinched-up portal of my hood. Head down I peered for the path with half closed eyes and struck out towards home. The footprints from my ascent were already rubbed out and I could no longer see the hills around me, just the swirling snow and the icy path beneath my feet. The world was white. A real sense of excitement and of being alive welled up inside me. Is it childish to still feel this way when it snows?! 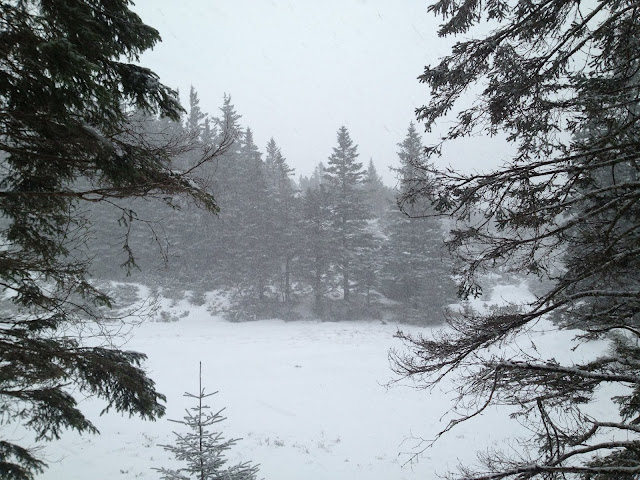 Back down in the trees and I was more able to enjoy the merry dance of the flurries. In between the trees big, fat snow flakes spiralled slowly from the sky, carpeting and muffling everything. In the open areas between, the snow was manically racing horizontally on the wind.

Not many others witnessed this tiny event. Two elderly Norwegian runners, inspirationally puffing past me up the hillside, witnessed the tail-end of it. A heron, stalking tiddlers in the dark, open pools of the small stream, appeared indifferent to the changing conditions and a tiny wren danced along the rocks lining the way, leaving stick-like footprints in the fresh snow.

Sitting here now in the warmth of my apartment, with the return of the sun, blue sky and a world painted white, I think back to my own private snowstorm this morning with fondness and yearn to witness more. 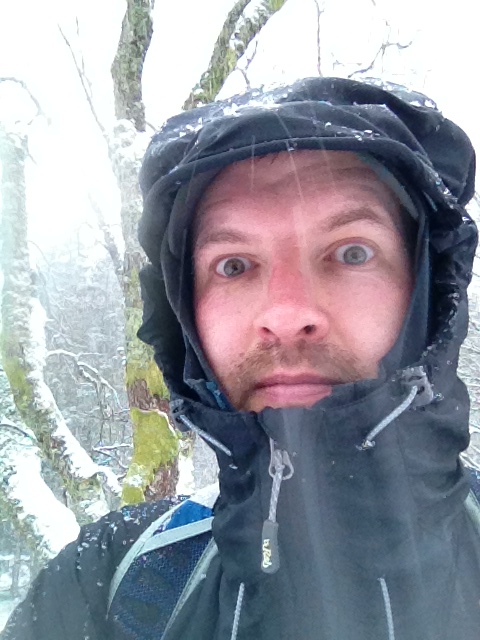