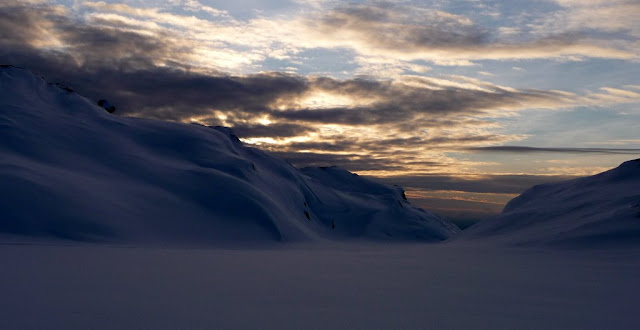 Time to burn off some Christmas excess. Like a retreating Santa Claus I decided to head upwards with a bag on my shoulder full of presents. Out the front door, walk up the road for all of three minutes and it was on with the crampons. The path is really steep here. And covered in hard ice. Which in turn is cunningly covered with a layer of fluffy dry snow. 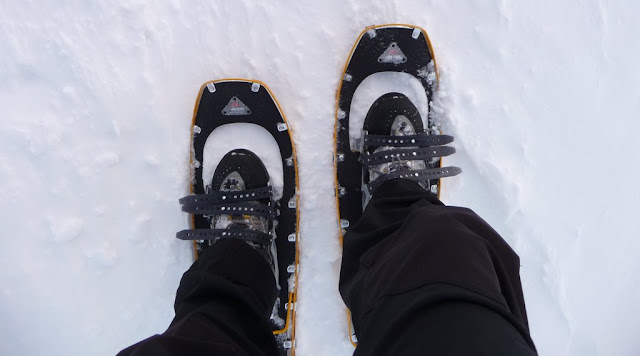 One sweaty hour later I was at the top. Time for more toys. Crampons exchanged for snowshoes. On with a wind-shirt, hat and bigger gloves.

Swinging west into the wind I settled in to my new gait, feet slightly wider apart than when I'm on my skis. It was hard to tell if there was any change in my pace. On my skis I'm quicker on the flat and on the down-hills. Apart from when I'm lying face first in a drift.

The snowshoes did allow for as-the-crow-flies travel while the ski tracks zig-zagged around me and the odd boot tracks, post-holed the path of least resistance. 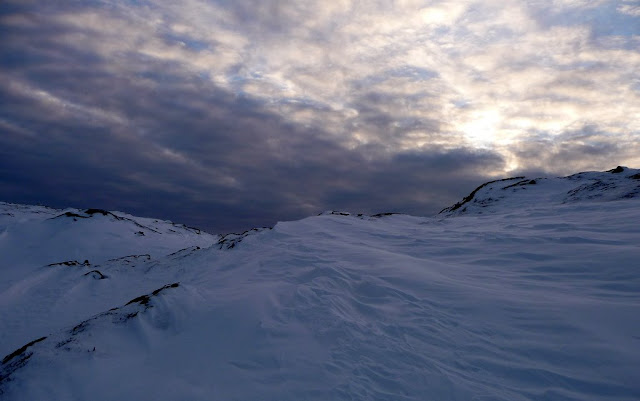 Time to head home. The sun, on it's lazy winter arc, decided to wind down for the day. Christmas marzipan treats and hot blackcurrant drink fuelled my swing south and home. 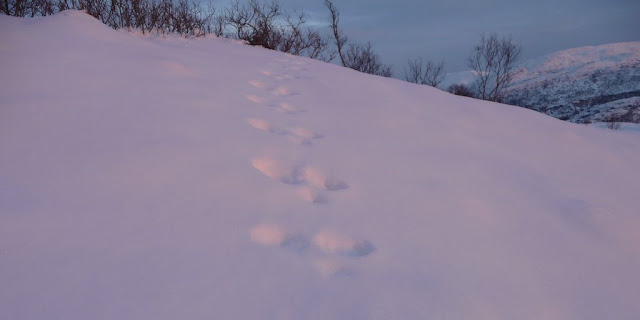 The sun gave a quick wave goodbye, bursting briefly into the space between the cloud and horizon flushing the hills with pink. Animal tracks popped out of the flatness. The light caught the waft of dry snow that erupted with my every footstep and made it sparkle like crystals. The light show was beautiful but short lived. The various trails from over the hills slowly converged and the snow grew firmer. On the edge of the city the trail stopped and the streetlights started. Toys packed away I buried my hands in my pockets. Ah good, I hadn't lost my front door key. 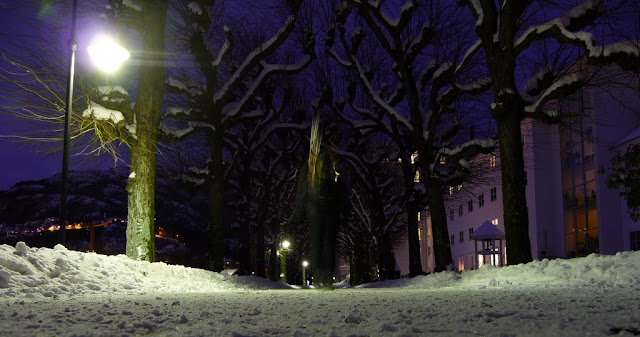 All right, stop showing off, with your snow and whatnot. Some of us have had a thaw and only received our snowshoes today... :(

Wait, you want to burn of Xmas excess and then eat upon your return Xmas marzipan treats and have a hot blackcurrant drink?! ;)

One of the advantages of having such breathtaking hillwalking on your doorstep. Great stuff. Hope you had a nice Christmas and Happy New Year Joe!

Fraser - I had to suffer watching the UK enjoy all the snow in earlier this month! The snow isn't guaranteed to stay in Bergen all winter so I'm going to enjoy it while it lasts.

Maz - yes, it's a great place to live! Happy new year to you too!

Great shots, like Fraser all the snow has gone here and my Scarpa T4's haven't even arrived yet, I know we had it twice already but I'm still envious.

a nice read and great photos as always! know and hope the toys won't stay shiny for too long ;p

another great post, even though it just fills me with winter jealousy ;)

happy new year and all that, look forward to following more of your norwegian adventures

Great little foray in the snow. Wish it was as white here as it has been recently.... oh and that I was out in it!

I'm heading over your way on the 14th of Jan so hope the snow stays until then.....

Richard - I should stop showing off, we're entering another thaw cycle!

David - no, the toys have been well used already.

Kate - happy new year to you too! Looks like we've all been trading winter jealousy across the North Sea this winter.

The Dude - fingers crossed! We're experiencing weekly snow/thaw cycles in the city right now but there is plenty of snow in the mountains.