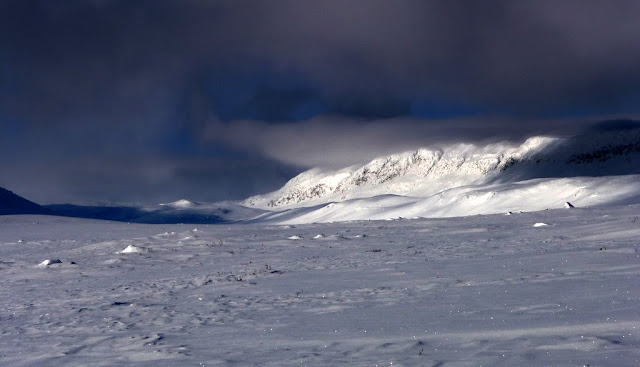 They say it never rains, it pours but at -25C it doesn't rain either. My calendar got a bit congested as January bumped into February and I found myself invited to join friends for a weekends skiing in Ustaoset followed by a 12 hour turn-around back in Bergen and then off again for five days helping to guide a party of school kids on cross country skiing. I viewed the weekend in Usaoset as a warm up for the school trip. 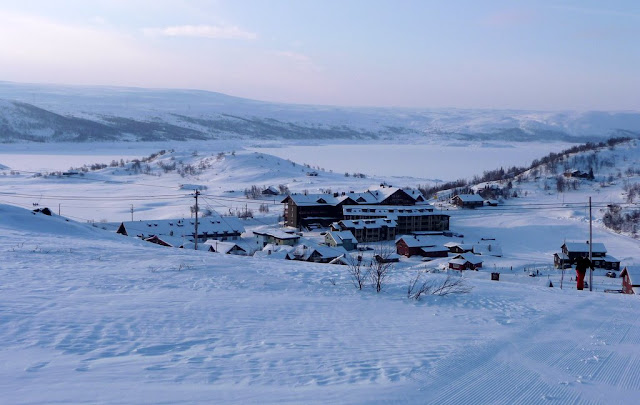 We arrived in Ustaoset on the Friday night 'ski party' train, full of people fleeing the city in search of fresh air and adventure. Most people crack open their weekend's liquor supply on the train, just to sociable you understand! As we alighted at 1001m the cold air instantly cleared the fug from the train carriage. The bad news was the lake below the train track wasn't quite frozen enough for ski travel. No matter, we'd spend our weekend up on the higher trails. 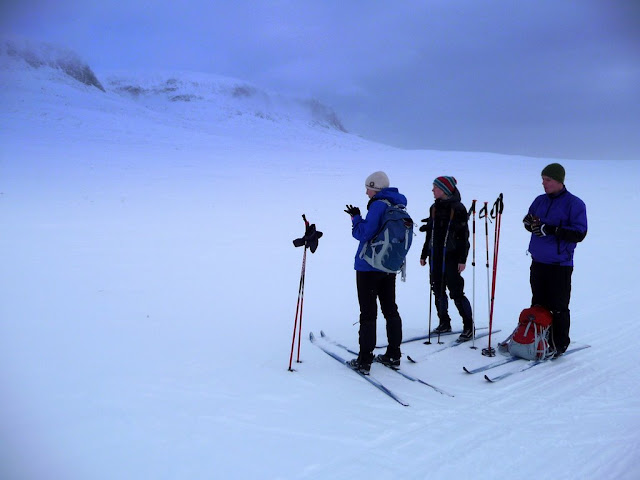 The next morning we got an early start and ascended into the murk. The route today was a rolling 22kms with hard earned up-hills rewarded with twisty, off-camber downs. 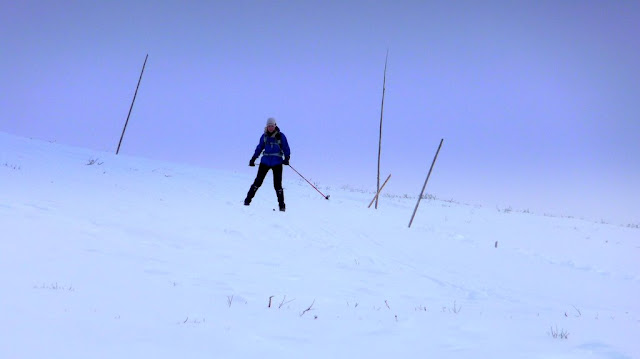 As we sat around at lunch the sun started to cut through the haze. Bellies full it was time to hit the trail which climbed hard back up to the base of Hallingskarvet (1905m) which is part of the course of the Skarverennet, a huge, 12,220 participant 38km ski event held in the area. The event is so large that organisers hire 12 trains from NSB just to ferry all the attendees from the major cities! 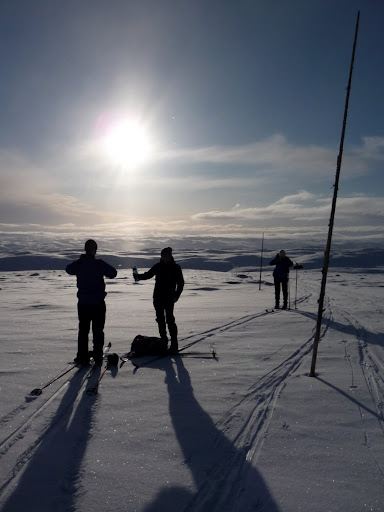 With the clouds almost gone the view from the top of our route was spectacular. Endless miles of rolling, snow covered terrain in every direction. There is scope for some serious back-country adventures here. 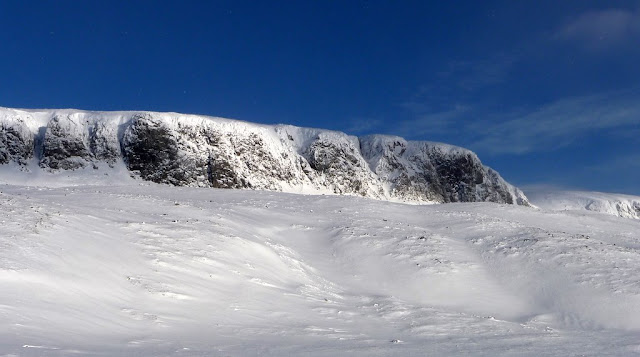 As we traversed the ramparts of Hallingskarvet some evening haze returned to the sky creating eerie lighting effects as the temperature crept back down. The only thing to do now was slide all the way back to the apartment, a roller-coaster ride into the setting sun that had me grinning from ear to ear. 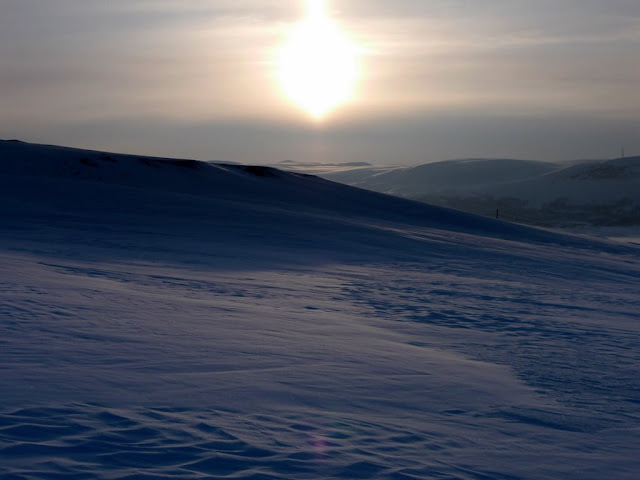 Another early start on Sunday had us on a slightly shorter 18km but harder route out to the Prestholtseter hytte (1358m). The window mounted thermometer had the temperature pegged at around -20C down in the cozy resort so it was with some relief that the first 6km of the day were straight up! It got the blood flowing pretty quick but even with such a concerted effort straight out the door it was very cold. Any exposed hair froze within minutes and we tried to cover every square inch of exposed skin to thwart frost nip. 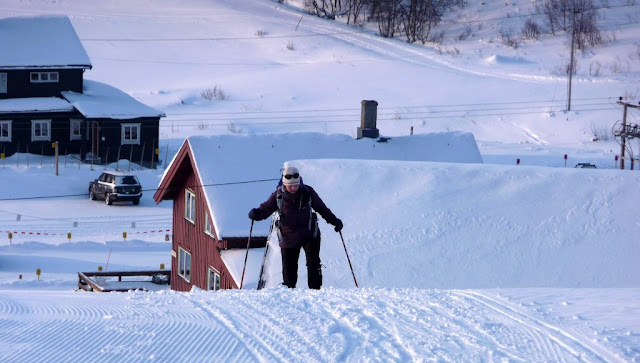 One thing we did notice was how few locals seemed to be out skiing. I guess they wait until later in the Spring when longer days and sunshine make for more comfortable skiing conditions. The upside to this is that the trails were almost deserted which made for beautiful silent serenity. Space to think and cleanse the mind before the hectic week that would start tomorrow. 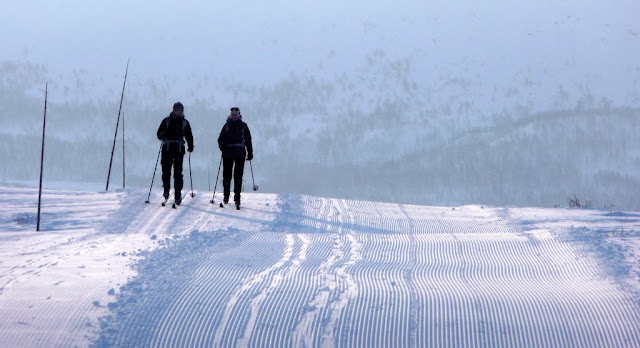 Up over the saddle of the hill the trail seemed endless and perfect. After the crest we were faced with two choices, a straight line off-trail crash through untracked snow or a beautiful carve around the contours of the hill on butter-smooth prepared trails that were also untouched by anyone's skis. We split up and proceeded to script our own signatures across the snow down to our lunch spot.

The usual welcoming embrace of our Norwegian hosts was strangely missing when we reached Prestholtseter. I'm not sure if something was lost in translation but we were not made welcome at the hytte and subsequent enquiries to Norwegian family members and friends revealed utter bewilderment to the reception we received. Undeterred I dug us a nice sheltered snow couch right outside and we huddled together in the brutal cold to hurriedly chomp down calories. How two of our friends sat there without puffy coats I'll never know, I begged them to buy some insulation for next time and I think that lunch stop showed them why. We got moving as soon as possible (which took a little longer for me as one of my bindings froze up) and everyone agreed that it was probably the coldest stretch of skiing any of us has had done. Back at the high cross roads we turned left for home and got to freeze our asses off down the same perfect downhill as yesterday.

Mentally refreshed it was time to jump on the train back to the city for a 12 hour turnaround. Tomorrow I would start five days of skiing at the mercy of 28 teenagers... 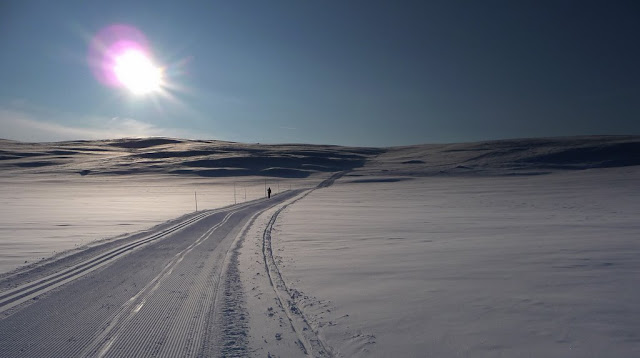 28 teenagers! Brave man indeed. I lose my rag with two.

There's winter, and then there's proper winter. I think you win!

Wonderful photos, the contrast in the blues are perfect. What camera are you using?

You must stop taunting us with photos, it's unbecoming :-P

as PCT says you win!
did you move for work or adventure, or a various combination's of the above?

...i keep thinking we should move a bit nearer some hills.

Martin - no rags were lost - well, not in front of the kids! I'll post a report and photos shortly.

PTC* - that was hands down the coldest temperature I've been in. You really got a sense of how dangerous it could be to be lost or injured in those conditions.

Roger - thanks! I'm using a Panasonic Lumix. I have the cheap but capable TZ4 compared to everyone else's lovely LX3s (I have LX3 envy). Some photos get tweaked with the basic controls in Picasa.

Kate - ha! I moved for a girl but stayed for the adventure. The work bit came last.

so, i just need to find another girl ;)

Kate - I'll introduce you to my house-mate ;)

Saw the splendid photies already last night on the iPhone, but the flu drove me into the bed. Great stuff. -25°C is serious business, we have only around -6°C currently but with my flu that's cold enough for me.

Great stuff. I envy your downhill confidence. As you will read in the coming days downhill on nordic skis is not my best skil.

About -10/-15 was the coldest it got for us last weekend. Skied once in Levi(alpine and XC) in -23 (according to the resort thermometer) and so know what you mean. Anything exposed gets bitten straight off and the wind chill when downhilling is deadly. If you're like me and you sweat easily when working then it's a truely dangerous combintaion. Stopping is no option. I'm realy surprised by the hut reception. Refusing people shelter in those conditions is downright irresponsible. Not something I've ever encoutered anywhere in Scandinavia.

Dave - -25C was an eye opener (and I'm not talking about the eyelashes that froze up). Suddenly those neoprene face masks made sense as did proper knotted zip pullers to make venting/closing easier in mitts. As a fellow 'easy sweater' I can whole-heartedly recommend ridding your layers of any laminates. I wore Bryjne mesh base-layer, Vapour Rise and another weather resistant but highly breathable soft-shell on top for high wind/precipitation events. I stayed dry all weekend.

Downhill on Nordic skis is indeed something that requires a lot of skill and balls! I'm still very timid really (I've only been skiing a year) but every time I get out I try and push myself a little bit more without risking my duff right knee.

The hut reception was astonishing. I feel it was partly our fault (somehow we had managed to go skiing with NO cash between the four of us) and the hut is a commercial concern I guess but as discussed with several Norwegians since our return the proprietors were uncharacteristically rude and potentially downright irresponsible not to offer us shelter to eat our pack lunch when it's -25C and breezy outside. It's not something I have ever experienced before and trust it's a once-in-a-lifetime occurrence.